Skip to content
Home“Do you want an economy, or a planet we can all live on? I don’t want my future compromised by inaction on climate” — 16 year old from India 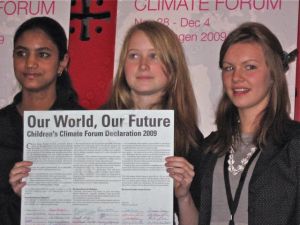 Young people from 44 countries are demanding that world leaders take decisive action on climate change. The time for talk is over, they declared at the end of a weeklong Children’s Climate Forum here.

“Our plates are empty due to drought. Our future is at risk, and we demand that something be done,” they wrote in a declaration titled “Our World, Our Future” signed by 164 participants aged 14 to 17 at the conclusion of the forum.

“I don’t want my future compromised by inaction on climate,” said Bipra Biswambhara, 16, of India.

Biswambhara and many of her fellow delegates were “shocked to learn how many people and parts of the world are already affected by climate change”, she told TerraViva. “We youth are committed to taking action in our home communities,” she said.

“We must have pity for future generations to come,” said Mohamed Axam Maumoon, 15, of the Maldives, a low-lying chain of islands that will likely vanish under rising oceans if temperatures rise two degrees C.

“We are not alone, everyone is being affected,” Maumoon said. As a result there was a strong feeling of cooperation and common cause throughout the week, he said. “If we all work together we can have a bright future.” 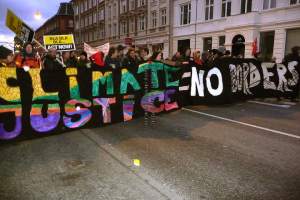 Echoing Maumoon’s statement of solidarity and commitment to work on climate change, Cressida Mawdesley-Thomas, 17, of Britain said, “The leaders and negotiators at the COP should learn from our example.”

In the closing ceremony at Copenhagen’s City Hall Friday, the young people presented their declaration to the president of the Dec. 7-18 conference, known as the COP 15, Connie Hedegaard.

The declaration recommends that industrialised countries ramp up spending on adaptation measures for poorer countries; cities be well planned and sustainable; safety standards, regulations and emergency protocols be established to prepare for climate-induced disasters; water be conserved better; and education on sea level rise and flooding and biodiversity-related projects be implemented.

Noting that half the world’s population is under 18 years old, Hedegaard told the young delegates: “You must tell the politicians that they cannot leave Copenhagen empty-handed two weeks from now. Because you, the citizens – the new generation – demand us to take action now.”

The Children’s Climate Forum was organised by the U.N. children’s agency UNICEF and the city of Copenhagen, and involved consultations among the young delegations, as well as workshops and discussions focusing on local activities to educate and respond to climate change. 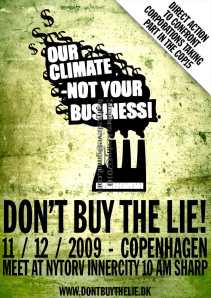 Children and young people are well placed to contribute to the fight, the organisers said in a release. They are more open to new coping strategies in at-risk countries, and they can quickly make low-carbon lifestyles and career choices a part of their daily lives in the industrialised world.

Children should therefore be given a chance to take an active part in decision-making at local, national, and global levels.

Governments are doing nothing right now even though many countries are already being affected, Travis Bruce Mills, 15, of New Zealand told TerraViva.

“We demand an ambitious, fair and binding treaty,” Mills said.

The fact that most of the current decision-makers are middle-aged or older and won’t have to live with the full impacts of climate change may be one of the reasons governments have failed to act so far, suggested Biswambhara. She wants political leaders to get over their worries about climate actions that might hurt the economy.

“Do you want an economy, or a planet we can all live on?” she asked.

India is suffering many impacts from climate change, including drought and flooding, said Biswambhara, but India also needs sustainable energy sources. She and other children have looked at the McKinsey and Company business reports that detail how the transition to a low-carbon economy can be achieved.

With 80 percent of India’s energy infrastructure yet to be built, it needs to be low-carbon, green energy, she said.

“With the help of richer countries, maybe we could do wonders,” she concluded.