Powerful fossil energy interests are preventing the United States from making the necessary transition to 21st century energy sources, one of the country’s leading environmental economists documents in a just-published book.

Q: Why did you write this book?

A: We’re running out of time. The latest science shows that climate change is coming faster and posing greater risks than previously thought. We are at risk of triggering positive feedbacks that will lead to uncontrollable climate change.

Meanwhile, America is locked in a climate-policy stalemate, with very few in the public comprehending the real risks climate change poses. Most don’t understand that climate change is happening now. They don’t link extreme weather events we’ve been experiencing with climate change. As a result they are not demanding that politicians take action.

Q: Why don’t most Americans understand the fact that climate change is already underway and poses serious risks?

A: Fossil (oil, coal, natural gas) energy interests are pouring hundreds of millions of dollars into sowing doubt and uncertainty to blunt public concern and to provide political cover to those politicians they are funding. In America, there is a very concerted effort by fossil energy interests that bankroll right-wing and libertarian “think tanks” like the Competitive Enterprise Institute to create an atmosphere of doubt and uncertainty, just like the tobacco companies did regarding the health effects of smoking. 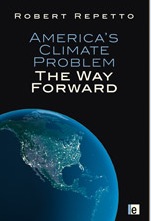 Q: You write that the U.S. Congress’s failure to address climate change – “the most serious environmental problem in history” – reflects the larger failure of an American democracy corrupted by money: “Not only can political support be bought, it can be bought cheaply….”

A: Studies have shown that political spending by corporations has the highest potential return on investment for companies and organisations with interests affected by congressional action. Senator James Inhofe [a Republican from Oklahoma], a powerful and longstanding opponent to action on climate change, received 768,000 dollars in contributions from fossil energy and mining interests during the 110th Congress.

Fossil energy interests are fighting to preserve their markets. What else can you do with coal except burn it? Railways also make a lot of money off shipping coal.

Q: Why do people elect representatives who do not represent their interests?

A: The public is not really aware of what happens in Washington. They’ve become disengaged from the political process and there is wide spread discontent with politicians. People feel their representatives are not acting in the public interest, and they’re right. Changing this is not easy.

During elections, incumbent senators and representatives outspend challengers three to one and they end up being re- elected term and after term. A senator’s election campaign will spend upwards of five million dollars to get re- elected.

Q: The Obama administration has said climate change represents “a clear and present danger” but has taken little action in its two years in office. What can the administration do when House of Representatives recently voted to eliminate all funding for the Intergovernmental Panel on Climate Change?

A: It is highly unlikely there will be a U.S. climate bill. However, if the Obama administration chooses to act, they could do a great deal on the regulatory side. Enforcement of environmental rules regarding coal mining was incredibly lax under the [George W.] Bush administration and the costs of the environmental damage off loaded onto the American public.

Q: Opponents of action on climate claim it will hurt jobs and the economy.

A: That’s a false claim. Every reputable economic analysis has shown the opposite. Switching to green energy sources will mean more jobs and a healthier economy. People should question why large corporations that don’t hesitate to raise prices or lay off their workers are so concerned about job protection and price stability that they fund think tanks and other organisations to make false claims about climate legislation.

Q: You argue that America’s future depends on a transition to new forms of energy. Can you explain?

A: The basic technology of our cars is over a century old, our coal-powered electricity system older still. Once much of our energy came from water mills that were replaced 50 years later by steam power, to be later replaced by electrical power. During each transition, there were prophets of doom claiming it would be too risky, too dangerous to change.

We have not experienced an energy transition in our lifetimes but we must move to the green energy of the 21st century – renewables and major increases in energy efficiency. Europe has over 800 offshore wind projects, the U.S. has none. We are being left behind. We need to accelerate the transition to green energy.

Related articles on the need for economic and energy transformation:

Sir Nicholas Stern: On Our Way to Calamitous +5

Northern “Biopirates” Gobbling up Living Resources of the Global South