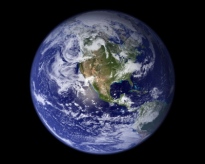 Apr 21 (IPS) – Today’s children will live in a new world of climate change and greatly diminished natural resources, which may give way to a nightmarish reality, or it could give birth to a happier and lighter way of living on the Earth, say environmentalists.

The scientific evidence for environmental troubles — from rising sea levels to species extinction to desertification — sends a clear signal that we are running into the limits of spaceship Earth to support us as it has for millennia.

“This world is ending; we need to lay the foundations for a new world,” says Alice Klein, a magazine editor and documentary filmmaker in Toronto. “We have a great opportunity to make a better world,” she told IPS.

Klein’s film “Call of the Hummingbird“, to premiere on Earth Day — Apr. 22 — at Toronto’s Hot Docs film festival, tracks the 13 days when some 1,000 teachers, eco-activists, farmers, Mayans, Rastafarians, holistic health-workers, non-governmental organisation executives, student leaders from all over Latin America and a few from Europe and North America camped out together in central Brazil in 2005.

Their purpose was to live on the land and co-create a temporary peace eco-village in harmony with nature and each other.

It wasn’t easy or harmonious. There were problems with garbage, sanitation and, not surprisingly given the diversity of their backgrounds, simply getting along with each other.

“There is very little training or study in our formal education systems about conflict resolution and how to get along with each other,” says Klein, noting that, instead, we are constantly exposed to violent and conflict-ridden programming in our media.

Another fundamental issue in modern culture is separation from nature,” she says. “We don’t see that we are connected to the natural world.”

With more people living in cities than in rural areas for the first time in human history, the delusion of separation is likely to worsen.

A recent scientific study found that more children knew the characters of the video game Pokemon than could recognise an oak tree or an otter, according to the Ecological Society of America, a Washington DC-based organisation of 10,000 ecological scientists.

For full story see Happiness Is a Smaller Eco-Footprint