Skip to content
HomeCLIMATE CHANGE: A Game With Too Many Free Riders 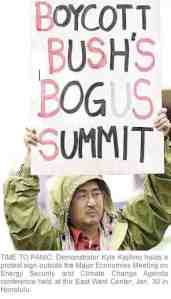 BROOKLIN, Canada, Apr 4 (IPS) – The evidence is piling up that climate change threatens to bring a chaotic future unlike anything ever known. Taking collective action in time to avert the worst means rewarding climate-safe behaviour, punishing climate transgressors and publicly praising those who are trying to protect the environment, a new study suggests.

The nations of the world will come together to set a target and timeframe for reducing emissions from burning fossil fuels at the end of 2009 in Copenhagen, Denmark. Scientists have repeatedly stated the 2020 target must be 25 to 40 percent emission reductions from the 1990 emission baseline. Can the global community reach this collective target through individual efforts when everyone suffers individually if the target is missed?

The short answer: No.

At least that’s the result of an elegant experiment to examine people’s ability to deal with this kind of situation. “People do not act rationally, even to protect their own interest,” observed Manfred Milinski of the Max Planck Institute of Evolutionary Biology in Plon, Germany.

[ *This story is part four of a four-part examination of the psychological and behavioural changes needed to dial down the temperature on our global greenhouse. Part one: Climate Change Reshaping Civilization Part two: Climate River in Full Flood   Part three: CLIMATE CHANGE: A Vision Worth Fighting For ]

Milinski’s experiment is actually a simple game. Six players each receive 40 euros in their private accounts. In each round, players anonymously transfer 0, 2, or 4 euros into a collective “climate account”. After 10 rounds the game ends and the climate account must contain at least 120 euros. If the goal has been reached or exceeded, the climate has been saved and each player can keep whatever is left in his or her private account. If a group fails to deposit a total of 120 euros, then there is a 90 percent chance that the climate is lost and all players lose all of their money.

Ten groups played the game, and only five groups reached the goal. And those five barely made it, a shocking result given the fact that all groups were told about the serious risks climate change posed. If everyone contributed 2 euros in each round, the goal would be achieved, saving the climate and as a reward everyone would go home with 20 euros in their pocket. Simple. Everyone wins.

“All groups should have made it,” Milinski told IPS. The study was published in the Proceedings of the National Academy of Sciences (PNAS) Feb. 19.

So what happened? Free riders. At first people made their 2 or even 4 euro contributions, but then some stopped, hoping the others would make up the difference, so they’d get to keep more money in their private account. Seeing one person’s “greed in action” apparently triggered others to stop making contributions as well. However, as the game progressed and it looked like the group might miss its 120 euro goal and everyone would lose, contributions shot up again. For half the groups, it was too late and they fell short by a few miserable euros.