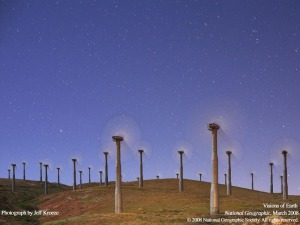 The world has turned a green corner toward a more sustainable future, with investments in clean energy outpacing fossil fuel power generation for the first time.

Despite the global economic crisis, a record 155 billion dollars was invested in clean energy companies and projects worldwide last year, mainly in wind and solar, according to a new report from the U.N. Environment Programme (UNEP).

More remarkably, that investment in clean energy topped 2007’s record investments by five percent, in large part as a result of investments by China, Brazil and other emerging economies.

Achim Steiner, UNEP’s executive director, says that “2008 was the first year where there was more investment in non-carbon energy sources than in high carbon and nuclear energy.”

UNEP has been calling for a “Global Green New Deal” to jump-start the global economy and use the various economic stimulus packages to make investments in clean technologies and ‘natural’ infrastructure such as forests and soils. Experts argue that this is the best bet for real growth, combating climate change and sparking an employment boom in the 21st century.

“There are literally millions of new jobs that could be created in the next few years,” Steiner said.

Renewable energy like wind, solar, biomass and geo-thermal can be rapidly scaled up since the technologies are well-developed and costs have dropped dramatically. For example, the Chinese firm Suntech Power has gone from being a startup to the world’s largest solar panel manufacturer in just eight years, Steiner said.

In the same period, China has gone from having practically no wind energy to becoming the world’s largest generator of wind energy.

“Renewable energy has now reached a tipping point where it is as important – if not more important – in the global energy mix than fossil fuels,” he said.

For complete article see  Twilight of the Fossil Fuel Era?