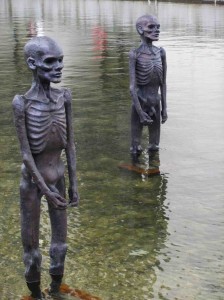 Betrayal and backsliding by rich countries marks the beginning of the final negotiations for a global climate treaty, according to many developing world participants at the U.N.-sponsored talks here.

“Developed countries express deep concern and commitment to action in their public statements, but it is completely different in the negotiating rooms,” said Algerian negotiator Kamel Djemouai, chair of the Africa group, which represents more than 50 African countries.

“What you hear in public is not what is being done,” Djemouai told delegates at a side meeting at the COP 15 climate meetings here.

At the last round of climate talks in Barcelona, African countries boycotted the meetings, saying that industrialised countries had set carbon-cutting targets too low to substantially reduce global greenhouse gas emissions. Climate change is already having significant impact on Africa and those impacts are a form of discrimination, Djemouai said.

“Science tells us that when the global average temperature is one degree C. higher, it will be two degrees C. hotter in Africa,” he added.

The current global average temperature is 0.78 degrees C higher than it was 100 years ago.

The United States and European Union are trying to “kill the Kyoto agreement” when the world must strengthen that agreement and follow the Bali Action Plan, Djemouai said.

The 1997 Kyoto Protocol is the first international treaty to set down legally-binding targets for cutting greenhouse gas emissions by at least five percent between 2008 and 2012, compared to 1990 emissions. Developing countries have no targets.

The Protocol’s complex rulebook was completed in 2001 and it took effect on Feb. 16, 2005. It has been ratified by 183 countries plus the European Community, but not by the United States.

Instead, the U.S. and others want a new agreement here which may not be internationally binding, and only requires each country to make pledges and be subjected to peer review.

Under the Bali plan developed two years ago, all parties – including the U.S. – agreed to set specific mitigation targets, and work out technology transfer and financing arrangements to help developing countries reduce their emissions and adapt to climate impacts here in Copenhagen.

Now developed countries are trying to change the agreement by adding in many other conditions before providing any real and effective targets, Djemouai said.

“We are just asking the developed countries to comply with the IPCC (Intergovernmental Panel on Climate Change) recommendation of 25 to 40 percent emissions cuts by 2020,” he said.

“Will the Bali action plan continue? If not, there will be a state of anarchy here,” Khor told delegates.

Khor acknowledges that the U.S., coming out of its “dark ages”, is not ready to make a full Kyoto-like binding agreement yet. But there is flexibility under the current rules for a significant U.S. commitment that is less legally binding without throwing out Kyoto, he said.

Instead, rich countries are trying to restart negotiations and have made emissions reduction commitments far below the 30 to 40 percent by 2020 that is needed to have any chance of keeping some small island states from being overwhelmed by rising sea levels, he said.

“Rich countries are climbing down from their commitments at a time when they should be stepping up, and shifting the responsibilities to developing countries,” Khor said.

There are serious implementation gaps at this point from developed countries, agreed Bernarditas de Castro-Muller, a negotiator from Philippines. Many that signed the Kyoto agreement have increased rather than reduced their emissions, and very little funding has been provided to help developing countries adapt, she said.

“We in the Philippines are scrounging around to find rice to feed our people after a series of devastating cyclones this year,” she noted.

“That inequity can’t be ignored,” Castro-Muller said. Although current emissions are split 50-50 between developing and developed countries, a fifth of the global population is responsible for half of the emissions. “Is this equitable?” she asked.

Developing countries are prepared to take action to reduce emissions, but that is dependent on developed countries making science-based reductions and delivering on their promises to help poorer countries, she said.