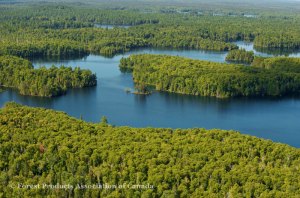 The decades-long war in Canada’s northwoods appears to be over. Environmental groups and Canadian logging companies linked arms Tuesday morning and agreed to work together to sustainably manage and protect 720,000 square kilometres of Canada’s boreal forest – an area twice the size of Germany.

“This is the biggest conservation agreement on the entire planet,” said Richard Brooks, spokesperson for participating environmental organisations and forest campaign coordinator of Greenpeace Canada.

The vast northern boreal forest is a broad band that circles the top of the world below the Arctic. It is the last great forest ecosystem – larger even than the Amazon – and the largest terrestrial storehouse of carbon. Made up primarily of pine and spruce trees, Canada’s boreal covers more than five million square kilometers, representing more than a quarter of the remaining intact forest on the planet. Just eight to 10 percent is currently protected.

“This is our best and last chance to save woodland caribou, permanently protect vast areas of the boreal forest and put in place sustainable forestry practices,” Brooks said in a press conference.

“We estimate there is roughly 20 billion tonnes of carbon in the trees and soils that are part of this agreement.”

That is equivalent to the annual emissions from 18 billion cars, he estimated. END_OF_DOCUMENT_TOKEN_TO_BE_REPLACED