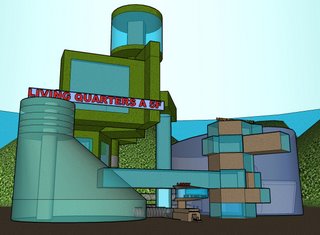 Jan 2 (IPS) – Dan Bloom thinks it’s time to figure out how to build self-sustaining cities in the polar regions because climate change will eventually make most of Earth uninhabitable.

These polar cities may be “humankind’s only chance for survival if global warming really turns into a worldwide catastrophe in the far distant future,” Bloom told IPS.

Bloom isn’t a scientist or any other kind of expert. A U.S. citizen in his late fifties living in Taiwan teaching English, he’s lived all over the world as a reporter-editor, teacher-translator and author. And now Bloom wants to shake people out their everyday indifference to the great emergency of our age: climate change.

“Life goes on as usual here in Taiwan. No one is doing anything and they don’t want to talk about it,” he says.

“The inactions of others can make us underestimate threats to our own safety,” writes Camilla Cavendish in a recent issue of the Times of London newspaper.

Cavendish cites studies that suggest a kind of herd mentality. If climate change is a problem, then people would be doing something about it. Since they’re not, then there is no problem. However, once people are aware of this dangerous tendency to follow the herd over the cliff, we can break away and forge our own more sensible path, she says.

Bloom wants people to realise that the world is on a path that could possibly lead to a future where just a few hundred million people survive in specially-designed cities in the Arctic. Originally he imagined this might happen 500 years from now. But scientists tell him it could happen far sooner than that.

Bloom has contacted scientists, experts, reporters, and many others around the world about his polar cities idea. A few months ago, a Google keyword search for “polar cities” would have produced no results. Today, there are nearly 3,000 sites that feature or offer comment on Bloom’s idea, including one with a series of polar cities illustrations.

Plenty of the comments are from Bloom himself, in a one-man-who-doesn’t own-a-computer attempt to spread the word. Suffice to say he spends a lot of time in Tawianese internet cafes.

His Quixotic quest began less than a year ago. Having heard various conflicting news reports about climate change, Bloom decided to research the subject as thoroughly as he could. The genesis of the polar cities idea came from a dire op-ed by the eminent British scientist James Lovelock in January 2006 in the Independent newspaper.

Lovelock wrote that the Earth will heat up far faster than any scientist expects due to many positive feedbacks such as melting of Arctic and Antarctic ice. “… Before this century is over billions of us will die and the few breeding pairs of people that survive will be in the Arctic where the climate remains tolerable,” he wrote.

Lovelock’s viewpoint was widely criticised as excessively pessimistic fear-mongering by many experts. No stranger to controversy, Lovelock first proposed the “Gaia Hypothesis” of Earth as a single highly complex organism in the 1970s. Last October, with many leading scientists listening, he reiterated his claim that “global heating” is progressing very fast and was likely to produce an apocalyptic six-degree C. rise in the global average temperature before the end of this century.

“At first I was depressed, but I am an optimist,” Bloom says.