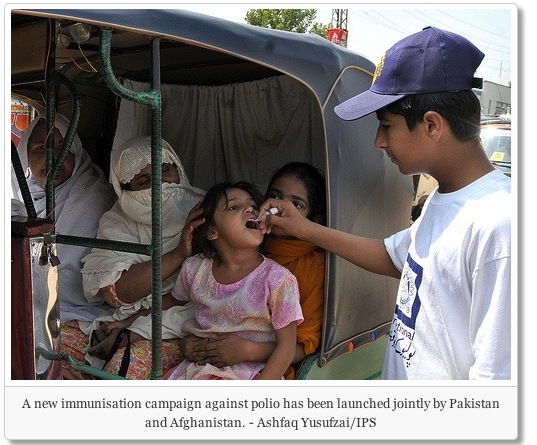 In northern Pakistan, one in ten children dies before the age of five from diseases such as polio, measles or hepatitis, despite the availability of vaccines. And while health workers feared visiting this region, which includes the mountainous Swat district controlled by the Taliban until 2009, local people also fear the potentially life-saving vaccines.

“Some local imams (religious leaders) have been preaching that vaccines are an attempt by the U.S. government to sterilise children,” said Erfaan Hussein Babak, director of The Awakening project, which aims to promote vaccinations in the Swat district.

“The child mortality rate from preventable diseases is distressingly high,” Babak told IPS by phone from the region.

Some people in the region understand that vaccines are safe, but overall, there is little demand by parents for vaccinations, he said. To counter certain negative perceptions, The Awakening project is working to promote child vaccination by establishing village health committees, school clubs and radio programs.

The project is being funded by the Canada-based Sandra Rotman Centre as one of five projects awarded 10,000 U.S. dollars to educate populations in developing countries about the use of vaccines and immunisation to prevent diseases.

By 2004, polio had nearly been eradicated in Pakistan. However, the disease has seen a resurgence in the northern areas, in part due to the mistaken belief that the oral vaccine could render children impotent or sterile.  END_OF_DOCUMENT_TOKEN_TO_BE_REPLACED

(IPS) – Washington’s attempts to bring security to Iraq and Afghanistan are not only making life harder for local people, they are breeding more terrorists, warn international security experts.

Under its anti-terrorism agenda, the U.S. has centralised power and security in post-conflict Iraq and Afghanistan, which ironically creates perfect conditions for terrorists and criminals.

“There is a great fear that unstable states and post-war societies provide an ideal breeding ground for terrorist training and activity,” said Albrecht Schnabel, a senior fellow with the Research Programme on Human Security in Bern, Switzerland.

“Yet almost three years after the toppling of Saddam Hussein, Iraq is characterised by chaos, violence and disintegration. The methods used to rebuild Iraq’s security sector are simply making matters worse,” he told IPS. END_OF_DOCUMENT_TOKEN_TO_BE_REPLACED