A lot of coral reefs have died this year due to unprecedented ocean heating largely due to climate change. I broke that story last summer. Few coral reefs will survive the next 50 years most experts say without immediate action to reduce greenhouse gas emissions. 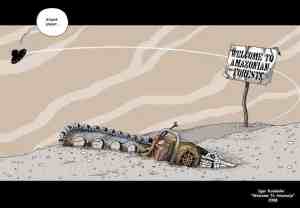 Forests are next in line according a new study in PNAS. Huge uncontrollable wildfires will dominate forest landscapes of the near future without dramatic reductions in the burning of fossil fuels the study found.

I would have done a full article explaining all this but simply can’t find a publication willing to pay me to do the work. That’s why I am trying community supported journalism where readers donate small amounts so these articles get done and made available for millions to read.

FORT LAUDERDALE, U.S., Jul 8 (IPS) – Coral reefs need to be put on “life support” if they are to survive climate change, but their ultimate survival is dependant on major reductions in fossil fuel emissions, say experts.

Climate change is making the ocean too warm and too acidic for most corals species to survive beyond the year 2050, many marine scientists now believe.

“The situation is serious to the point of desperation,” Aronson told IPS in an interview.

Past and present carbon emissions from burning fossil fuels have already altered the oceans, leading to declines in corals in many areas. This trend will continue for decades even if it were possible to eliminate all emissions today, scientists say. Current emissions are running at eight to nine gigatonnes a year and rising, resulting in dramatically altered oceans where few of the current coral species will be able to survive.

“This is a pivotal moment. We must act strongly and immediately if we are to have coral reefs as we know them,” Aronson said. END_OF_DOCUMENT_TOKEN_TO_BE_REPLACED