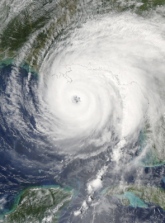 “…New Orleans is at the same risk as it was before Katrina.”
— Stephen Leatherman, director of the International Hurricane Research Center

The United States and other countries remain highly vulnerable, even as budget cuts to the National Aeronautics and Space Administration (NASA) imperil hurricane prediction and research.