Skip to content
HomeAmazon Forest Could Cook the Planet 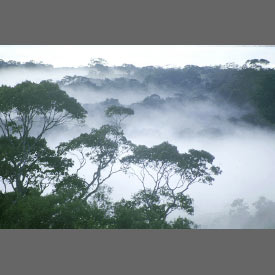 Dec 7 (IPS) – A two-degree Celsius rise in global temperatures could flip the Amazon forest from being the Earth’s vital air conditioner to a flamethrower that cooks the planet, warns a new report released at the climate talks in Bali, Indonesia Friday.

Paradoxically, a two-degree C. rise in global temperatures cannot be prevented without a largely intact Amazon rainforest, says Dan Nepstad, a senior scientist at the Woods Hole Research Centre in the U.S. state of Massachusetts and author of the report “The Amazon’s Vicious Cycles: Drought and Fire in the Greenhouse”, issued by WWF, the global conservation organisation.

“The importance of the Amazon forest for the globe’s climate cannot be underplayed,” said Nepstad at a press conference from Nusa Dua on the island of Bali, the site of the United Nations Framework Convention on Climate Change (UNFCCC) conference running until Dec. 14.

The trees of the Amazon contain at least 100 billion tonnes of carbon — 15 years worth of global emissions from all sources, he said. “It’s not only essential for cooling the world’s temperature but also such a large source of freshwater that it may be enough to influence some of the great ocean currents.”

It is in everyone’s interest to keep the Amazon intact, but deforestation continues apace, driven by expanding cattle ranching, soy farming, conversion into sugar cane for biofuel and logging.

This assault is drying out the forest, making it more vulnerable to burning. Rising global temperatures are also increasing evaporation rates, drying the forest further.

But the vicious cycle that’s drying out the forest can be broken, said Hans Verolme, director of WWF’s Global Climate Change Programme.

One of the essential steps is for industrialised countries to cut their emissions of greenhouse gases by 33 percent from 1990 levels over the next 12 years, Verolme said from Nusa Dua.

Forests can also be restored and protected from fire and become a source of jobs and income for local people, said Nepstad.

While nearly everyone wants to protect forests, 13 million hectares are lost every year, resulting in at least 25 percent of global carbon emissions. Chopping down forests is like throwing bilge pumps overboard when a ship has sprung a leak.

“We’re hoping there will be official recognition of the value of standing forests as part of the solution to climate change,” Gascon told IPS from Nusa Dua.

The UNFCCC Bali conference, sometimes called Kyoto II or Kyoto Plus, is the beginning of a two-year negotiating process that will lead to a new pact to deepen curbs on greenhouse gases beyond 2012, when the Kyoto Protocol’s current pledges expire. Kyoto did not include existing forests, in part because of objections by international environmental groups and Brazil.

This time around, most expect provisions for “avoided deforestation credits” to be included in any new agreement.

Some environmental groups continue to bitterly oppose rich countries and companies buying avoided deforestation credits from tropical countries in exchange for protecting forests to offset their carbon emissions. The main objection is the obvious inequity of allowing rich countries, which are by far the most responsible for climate change, to continue polluting simply because they have enough money to pay for the privilege.

“Governments are here to stop climate change, not promote carbon commercialisation. They should keep forests out of carbon markets, [and] stop subsidising agrofuels,” said Miguel Lovera, chair of the of the Global Forest Coalition.

For full article see Forests Could Cool or Cook the Planet

Kill Kyoto or Kyoto II Our Only Hope?

17 thoughts on “Amazon Forest Could Cook the Planet”