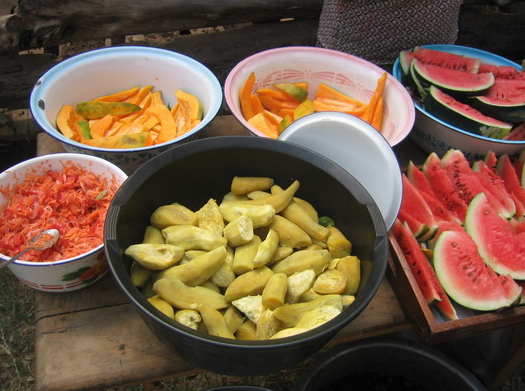 Women need to part of the solution

[UPDATE: Feb 2010. Small farmers can cool and feed the world according to Via Campesina. They may be right. After all industrial food production is about making profits not feeding the world nor is it concerned about carbon emissions. Shockingly the GRAIN study in this article did NOT include methane emissions from livestock, so the impact of big ag on climate is likely greater still.

Industrial agriculture is widely acknowledged to be unsustainable — check out this three-year international scientific assessment I covered in 2008 that will revolutionize farming as we know it. The food system is broken but the only reforms I hear about from governments, agribusiness and big NGOs are the same old solutions: new seeds and hi-tech equipment, more GMOs and maybe throw in some nanotech. Small farmers can already deliver what we need if we let them. — Stephen.]

Industrial agriculture may emit nearly half of climate-heating greenhouse gases, but that reality has gone unrecognised by negotiators at the climate treaty talks here, say farmers with La Via Campesina, an international movement of hundreds of millions of small-scale peasant farmers.

“Peasant farmers from La Via Campesina and others can help cool the planet,” Jean-Baptiste told a press conference at the Klimaforum09, the alternative climate action talks being held here in Copenhagen Dec. 7-18.

Unlike the official talks, set in a remote location surrounded by police and razor wire, Klimaforum09 is being held in the city’s community centre and is free and open to the public.

“System Change for Climate Change” – that’s the phrase most often heard at the Klimaforum09 and in parts of Copenhagen.

La Via Campesina’s claim that industrial agriculture is by far the biggest source of carbon emissions is based on a recent study that looked at all emissions from the global food system.

This includes oil-dependent industrial farming, together with the expansion of the meat industry, the destruction of world’s savannahs and forests to grow agricultural commodities, the use of fossil fuel energy to transport and process food, and the extensive use of chemical fertilisers.

The study was conducted by GRAIN, an international non-governmental organisation that promotes the sustainable management and use of agricultural biodiversity to support local communities. END_OF_DOCUMENT_TOKEN_TO_BE_REPLACED