Mass migration will inevitably be part of human adaptation to climate change, experts agree, since parts of the world will become uninhabitable in the coming decades.

Last year, 38 million people were displaced by climate-related disasters such as the flooding in Pakistan and China.

“Human displacement due to climate change is happening now. There is no need to debate it,” Jonas Gahr Støre, Norway’s minister of foreign affairs, told over 200 delegates attending the Nansen Conference on Climate Change and Displacement in the 21st Century in Oslo Jun. 6-7.

Governments and the humanitarian community need to understand this fact – and that it will get much worse in the coming decades, Støre said.

Without major emissions reductions, climate change could get far worse than anyone is prepared to think about.

“It may be more realistic to consider four degrees C of warming rather than two degrees C,” suggested Harald Dovland, former head of the Norwegian Delegation to the United Nations climate change negotiations.

The world has already warmed 0.8C and will rise to least 1.6 C even if all emissions of carbon and other greenhouse gases ended today, James Hansen, head of NASA’s Goddard Institute for Space Studies, told the conference.

“The last time the planet was two degrees C warmer was during the Pliocene (five to 2.4 million years ago) and sea levels were 25 metres higher,” he said. “If we burn all the fossil fuels (coal, oil, natural gas) we’re creating conditions that future generations will be unable to cope with.”

Even though a four-degree C warmer world “is choosing the suicidal path”, experts must avoid fuelling xenophobia with predictions of mass migrations and conflicts, says Francois Gemenne, research fellow at the Institute for Sustainable Development and International Relations in Paris.

“This also feeds into a security agenda of panic and paranoia,” Gemenne said.

At least 20 percent of humanity will be at high risk of severe flooding due to sea level rise and extreme rainfall events in the coming decades.

“Too many people live in low-lying deltas and other parts of the world that are becoming too dangerous to live in,” said Gemenne. They will be forced to move and often this movement will be permanent.

Rather than building walls and barriers, countries and the international community need to encourage people to move to safer ground. “Lift the barriers so that people can use migration to adapt to climate change,” he urged delegates.

In most cases, migration is the last choice when it comes to coping with climate change. No one wants to be forced to leave their home and a great deal can be done to reduce the impacts of natural disasters, Gemenne and others repeatedly said. However, this is a new role for the international development and humanitarian community.

In 2010, new seasonal forecast tools accurately projected where the floods and droughts were likely to be a month or two in advance in parts of Africa and Asia, Madeleen Helmer, head of the Red Cross/Red Crescent Climate Centre, told the conference.

“We could not get a cent from the donor community to help poor countries prepare,” Helmer said

“They said: ‘let’s wait and see what happens’,” Helmer said. 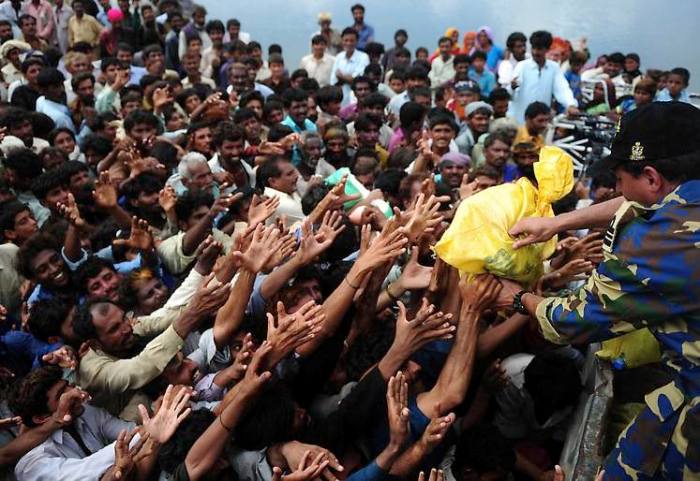 Requests for funding to help prepare Mozambique for flooding went unanswered prior to the devastating floods of 2000.

“Only 3.4 million dollars was needed for preparation. More than 98 million dollars ended up being spent on flood relief” illustrating the fact that it is far more cost effective to prepare than react, said Kelly David, head of the United Nations Office for the Coordination of Humanitarian Affairs Regional Office of Southern and Eastern Africa.

David and others urged a major shift away from a focus on disaster assistance to adaptation and preparation. That means that development, including overseas development aidm needs to be part of this focus on adaptation to avoid building a school that might be destroyed by a future heavy rainfall event, for example.

“There has been a huge shift towards preparation by governments in Africa very recently,” said David. “They have become worried about large-scale civil disruption such as those in the Middle East.”

Governments everywhere have been slow to realise the devastating human and economic impacts of from climate-related disasters.

“These losses are accelerating and governments can’t absorb those losses anymore,” said Andrew Maskrey, coordinator of the Global Assessment Report released in Oslo this week and earlier in Geneva by the United Nations International Strategy for Disaster Reduction Secretariat.

The Global Assessment Report (GAR) reports that while there are fewer deaths from flooding or cyclones in recent years, economic losses due to climate-related disasters are crippling low-income countries.

“The sheer scale of recurrent and probable maximum losses should be enough to shock governments into action,” the report concluded.

Damage to Indonesia’s schools and medical facilities has increased 1,000 percent in the last 20 years. Mexico is now losing 10 billion dollars worth of public infrastructure and assets annually due to storms and flooding.

Land use planning that accounts for the potential for climate-related disasters is by the far the cheapest way to prevent these losses. Relocation and retrofits will also work but are three to four times more costly, he said.

“The number and sizes of losses are accelerating… I hope we can scale risk reduction to match what’s coming,” Maskrey said.

Development assistance is insufficient and organisations like the World Bank and countries in the Organisation for Economic Cooperation and Development are beginning to face the challenges of creating a global framework to enhance resilience of the planet, said Nansen conference chair Margareta Wahlström, United Nations Special Representative of the Secretary-General for Disaster Risk Reduction.

First published as Millions May Soon Be Fleeing the Floodwaters – IPS ipsnews.net.