Stephen Leahy was at a conservation conference in Mexico five years ago when the dire state of freelance journalism became clear to him. After the event, he spoke with several other freelancers, all of whom had received travel awards to attend the event. Most of them had not been able to sell a single story about the conference.

“These other freelancers were supremely experienced. The former bureau chief from Asia from the New York Times, the former chief of some bureau at Reuters AFP, all these guys had really impressive credentials. And they couldn’t sell any stories as freelancers,” Leahy told Story Board during a recent phone interview.

“And one of the big pronouncements there was the need to protect 50% of the planet. Which is a number that is outrageous and had never ever been uttered before. And I was like ‘wow that’s a really good story.’ But they couldn’t sell any stories. I was the only one who had sold two or three stories.”

Leahy, who is based in Uxbridge, Ontario, says that several of those journalists quit freelancing after this dismal experience. Some made the switch to PR. But he wasn’t prepared to give up.

“People say to me all the time ‘my God, this is amazing stuff, how come I never knew about these things?’ So people want it and I want to keep doing it. How do we make this happen? The only solution I could come up with was, well, they have to pay me directly. Publishers aren’t going to pay, and many of the places I write for can’t pay. Who benefits from this stuff, who wants to see it? The readers. And so why not ask them?”

Over the next few years, Leahy built up an email contact list. The members on his mailing list now number around a thousand. Once a week he sends out a newsletter with links to his most recent stories. Approximately 10% of his newsletters also include a direct pitch for financial support.

“When I first started it was probably a much higher percentage than that. It was probably 50% pitches included with these newsletters. Now it’s declined quite a bit because it’s been pretty stable and I’ve been getting lots of assignments so I haven’t needed it so much,” he said.

Leahy has been freelancing for 22 years. His work has been published in National Geographic, The Guardian, Vice Magazine, Al Jazeera, and The Toronto Star among many others. But with ad revenues dropping, and freelance budgets shrinking, the market is tighter than ever for environmental reporting. Leahy has succeeded in making up some of the income shortfall with crowdfunding. These days, reader contributions account for approximately 20 to 25% of his income.

Leahy believes that his funding model would work with any subject that people care passionately about. But he says it’s also vital that readers feel a connection to the writer in question.

“The subject’s one thing but you also have to want to see more stuff from this writer. It’s a relationship between reader and writer. It’s difficult to do, it takes a long time to build up that relationship. You have to know your audience, you have to build a relationship with them and there has to be some sense of reciprocity. In return for me doing my thing, you help me out. It’s an exchange,” he said. 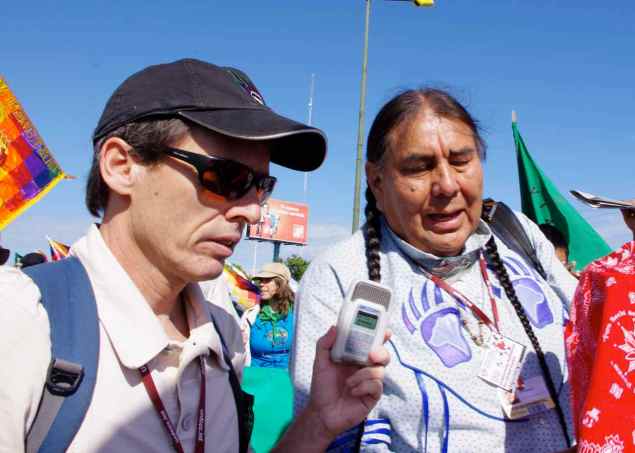 To build those relationships, Leahy has had to open up to his readers about his finances and his personal life.

“It’s hard to donate to a person you don’t really know. So I had to open up and explain the situation, the reality of freelancing. Sometimes you get $150 for a story you might have spent two weeks on. Any sensible person would not do that,” he said.

He has tried a number of different funding models – such as asking for weekly contributions and making project-based funding requests – but has found the most success by asking his readers for monthly contributions. And although only a small percentage of his readers offer him financial support, some support him in other ways.

“There are people who do not make financial contributions but they make information contributions or will help me out if I say ‘I’m going to X, Y, and Z to cover this subject. I can’t afford any hotels. Anybody know anyone who could let me stay at their place?’ And that worked out two or three years ago in Bonn, Germany to cover a UN climate meeting,” he said.

Though his published work covers weighty topics, Leahy says some of the most difficult writing he does is in his weekly email newsletters.

“The asking for money thing, of course, was difficult. But it was definitely as difficult to be open and more personable with other people. To be a real person, not just a byline. To say ‘yes I welcome your comments and ideas and I want to have a dialogue,” he said.

“I spend a lot of time editing my own stuff and thinking ‘I’ve got to get this into 200 words or less.’ Nobody wants more email spam, right? So it’s important to be really interesting every time, not just once in a while.”

Despite the difficulties involved in making a living as a freelancer, Leahy is committed to the career.

“You get to meet really interesting people,” he said.

“I had a corporate career for a few years and one of the reasons I gave it up is because I found the folks in the business community not particularly interesting. When I started freelancing, I started writing about farming and agriculture. And I thought ‘my God, farmers are way more interesting than these corporate CEOs. There’s much more to them.’”

And the people aren’t the only thing that Leahy finds interesting about freelancing.

“You get to learn all the time. And because I’ve been lucky enough to mostly write about what I’m interested in, it’s never boring. It’s never easy, but it’s never boring. And I get to choose not only what’s interesting but what I think is important,” he said.

“Freelancing allows you to use your time in the way you want to use it.”