Skip to content
HomeSir Nicholas Stern: On Our Way to Calamitous +5

Hundreds of Millions of Climate Refugees

‘Governments Fail to Understand Gravity of the Situation’ – Stern

[I wrote this piece 16 December 2009 and it remains fully relevant today and is posted here for 1st time. And please note that the +5C cited here is the global average which means the warming could easily be 10 C warmer where you live. All of this is well beyond anything humanity has ever faced — Stephen]

On its current carbon emissions path, humanity faces a 50-percent chance of warming the planet a whopping 5.0 degrees C by the end of this century, warned Nicholas Stern, an economist who is chair of the Grantham Institute for Climate Change and the Environment at the London School of Economics.

“Hundreds of millions of people will be forced to move. It will be the most severe global conflict in human history. That is what the science is telling us,” said Stern, author of the well-known Stern Review, the 2006 report that documented the effect of global warming on the world economy.

Humanity’s other option is to embrace a new energy revolution unlike anything ever seen.
And cities will be on the leading edge of this revolution, he said.

Cities use 80 percent of all energy and are responsible for the bulk of emissions. The good news is that cities are also the easiest places to get major emissions reductions because energy services are centralised and collaboration is easier.

“Local mayors and councils can more easily agree on policies and direct their administration to take action,” he said.

“Cities are already doing the work of national governments on climate,” said David Cadman, president of ICLEI – Local Governments for Sustainability, an international association of local governments that is hosting a mayors’ conference featuring mayors from more than 100 cities as part of the climate negotiations here.

Copenhagen to be carbon-neutral by 2025 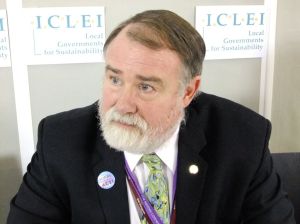 ICLEI has sponsored the Cities for Climate Protection Campaign for the past decade. Toronto, Canada has already cut one million tonnes of CO2 per year. Sao Paulo, Brazil with 11 million people, has reduced emissions 20 percent since 2005 and is aiming for 30 percent by 2013.

Cities will also be earliest and hardest hit by climate change. Twenty of the 30 largest cities are vulnerable to sea level rise. When droughts or heat waves strike, city dwellers suffer, offering plenty of incentive for cities to act on climate, said Nicky Gavron, former deputy mayor of London.

With a concentration of people and resources, cities often spark new technologies such as automated banking machines and broadband internet, said Dimitri Zenghelis of the Energy, Environment and Development Programme at Chatham House, a British think tank.

“Everyone needs to understand that carbon emissions must decline sharply and that it will pay off to take early action,” Zenghelis told IPS.

Government protection of carbon-intensive industries such as the fossil fuel sector is not in the public interest, he said.

Action by national governments is slow in coming because understanding of the gravity of the climate crisis has been slow to sink in, said Stern.

The news media are crucial to changing this and explaining that restructuring the world economy can bring a safer, more secure, more biodiverse and cleaner world.

“The process to get there will require dynamism and creativity,” he said.

Governments not only need to invest in new technologies, they must collaborate with the rest of the world since this is a global problem. Proposals to put 50-100 billion dollars into an annual adaptation fund to help developing countries cope with climate change would require a mere 0.1 percent of the GDP of rich countries, said Stern.

“That amount is no financial burden. After all, we are dealing with the biggest problem facing humanity,” he stressed.

Cadman noted that governments have no problem subsidising the fossil fuel industry in amounts approaching a trillion dollars.

“There were also trillions to bail out the financial sector. Money is not the problem,” he noted.

14 thoughts on “Sir Nicholas Stern: On Our Way to Calamitous +5”