Toxins and pollutants are major cause of illness

Toxic pollution affects the health of more than 100 million people, shortening their productive life spans by an astonishing 12.7 years on average.

It is a common misperception that disease is responsible for most illness, when in fact toxins and pollutants in the environment are a major source of illness and reduced life spans globally.

Unlike diseases, toxins and pollutants like lead, mercury, chromium, radionuclides and pesticides were created by humans and are often improperly disposed of in a classic example of fouling our own nests.

“To be honest, we were astonished the number was so large,” said Bret Ericson of the Blacksmith Institute, a small international NGO that released its annual report “World’s Worst Pollution Problems Report 2011” last week.

At least 100 million people are affected based on assessments of 2,000 toxic sites in 47 countries. Most of these sites are right inside villages and towns – all are close to people.

“There are thousands more sites out there,” Ericson told IPS. END_OF_DOCUMENT_TOKEN_TO_BE_REPLACED 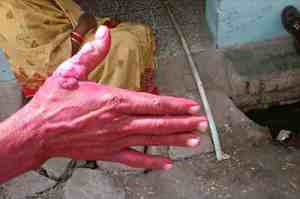