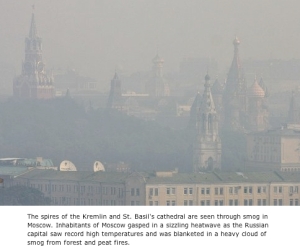 A wind turbine on an acre of northern Iowa farmland could generate 300,000 dollars worth of greenhouse-gas-free electricity a year. Instead, the U.S. government pays out billions of dollars to subsidise grain for ethanol fuel that has little if any impact on global warming, according to Lester Brown.

“The smartest thing the U.S. could do is phase out ethanol subsidies,” says Brown, the founder of the Washington-based Earth Policy Institute, in reference to rising food prices resulting from the unprecedented heat wave in western Russia that has decimated crops and killed at least 15,000 people.

“The lesson here is that we must take climate change far more seriously, make major cuts in emissions and fast before climate change is out of control,” Brown, one of the world’s leading experts on agriculture and food, told IPS.

Average temperatures during the month of July were eight degrees Celsius above normal in Moscow, he said, noting that “such a huge increase in temperature over an entire month is just unheard of.”

Do you find this article interesting? It is funded by contributions from readers. Please click here to learn more about Community Supported Journalism.

On Monday, Moscow reached 37 C when the normal temperature for August is 21 C. It was the 28th day in a row that temperatures exceeded 30 C. END_OF_DOCUMENT_TOKEN_TO_BE_REPLACED