It’s difficult to do research and write articles while traveling and holidaying (not to mention the challenge of finding a good internet connection). And it is a challenge to write articles while sitting on a bed or at a cafe where kids are trying sell you scarfs, hats and Ts in rapid Spanish where my comprehension is near zero.

This is why no new stories have been posted recently although I am working on several presently. Difficult to predict when they’ll be done since we are moving around quite a bit — tomorrow we move on to the Galapagos Islands. Tough I know but someone’s got to do it.

Jun 11 (IPS) – Patent applications for the world’s first-ever human-made species have been made to patent offices around the world.

The Venter Institute, named for its founder and CEO, J. Craig Venter, has applied for a patent on a novel bacterium made entirely from synthetic DNA in the laboratory, according to a civil society organisation concerned that this new technology is outpacing ethics and safety protocols. Applications have reportedly been made to more than 100 patent offices over the past few months for the synthetic bacterium called “Mycoplasma laboratorium”. “In the tradition of ‘Dolly,’ (the first cloned animal) we have nicknamed this synthetic organism ‘Synthia'”, said Jim Thomas of ETC Group, a Canada-based organisation that recently won a 13-year legal battle against Monsanto’s species-wide soybean patent.

“These monopoly claims signal the start of a high-stakes commercial race to synthesise and privatise synthetic life forms,” Thomas told IPS. “Will Venter’s company become the ‘Microbesoft’ of synthetic biology?”

END_OF_DOCUMENT_TOKEN_TO_BE_REPLACED

Scientific studies have collected evidence of the negative effects of the glyphosate-based herbicide Roundup on human and animal health. The chemical is used in aerial spraying to eliminate illicit coca crops in Colombia.

TORONTO, Jun 11 (Tierramérica).- U.S.-funded aerial spraying of suspected coca plantations in Colombia near the Ecuador border has severely damaged the DNA of local residents, a new study has found.

Blood samples from 24 Ecuadorians living within three kilometers of the northern border had 600 to 800 percent more damage to their chromosomes than people living 80 km away, found scientists from the Pontificia Catholic University in Quito, Ecuador.

The border residents who were tested had been exposed to the common herbicide glyphosate — sold by the U.S. agribusiness giant Monsanto under the brand Roundup –during a series of aerial sprayings by the Colombian government begun in 2000, part of the anti-drugs and counterinsurgency Plan Colombia, financed by Washington.

The Ecuadorians suffered a variety of ailments immediately following the spraying, including intestinal pain and vomiting, diarrhea, headaches, dizziness, numbness, burning of eyes or skin, blurred vision, difficulty in breathing and rashes, says the study, which is to be published in the journal Genetics and Molecular Biology.

But the extensive damage to DNA (deoxyribonucleic acid) found in the randomly selected individuals may activate the development of cancer or other developmental effects resulting in miscarriages, according to lead researcher César Paz y Miño, head of human molecular genetics at the Catholic University of Ecuador. END_OF_DOCUMENT_TOKEN_TO_BE_REPLACED

For the first time ever in the US a huge range of public interest groups are coming together for a networking conference in Atlanta starting June 27. Similar social forums have been held in various parts of the world for several years. While it may seem a bit vague, the idea is to build linkages and relationships between grassroots organizations. I can’t attend but am sure it would be very interesting and perhaps the start of something special.

From Big Melt to Big Swamp
By Stephen Leahy

Jun 5 (IPS) – The Earth is going dark. From the Arctic Ocean to the Himalayan mountains to the Russian tundra, ice and snow are in rapid and permanent retreat in response to global warming, a new U.N. report said Tuesday.

Glaciers, ice sheets, sea and river ice are all melting. The areas in the northern hemisphere covered by snow and ice have declined 1.3 percent per decade for the past four decades. And that’s expected to accelerate dramatically in the coming years.

“Around the Earth, white is being replaced by dark,” said Gunnar Sander of the Norwegian Polar Institute in Tromso, Norway.

The white — snow and ice — reflect sunlight while the dark — bare ground and open water — absorb the heat from sunlight, increasing the pace of global warming.

“This is affecting the heat balance of the planet,” Sander told IPS.

END_OF_DOCUMENT_TOKEN_TO_BE_REPLACED

Toward a Green Economy
By Stephen Leahy*

May 31 (IPS) – Humanity is facing historic and truly unprecedented challenges from climate change and the rapid decline of ecosystems that sustain life.

This article is final part of a three-part series published by IPS on natural capital and how future global prosperity and equity can be achieved through the preservation of ecosystems. See Part One: Like Enron, Earth Inc. Sliding Into Bankruptcy and Part Two: Global Warming is Real But I didn’t Do It

The 2005 Millennium Ecosystem Assessment (MA) found that 83 percent of the planet’s natural systems are in serious decline or on the brink. Adding to this already dire situation are the twin pressures of population growth and increasingly consumptive lifestyles.

Global population is expected to soar from today’s 6.6 billion to 9 billion by 2050. Even though we crossed the point of sustainable use of natural resources in the mid-1980s, many of the 2.4 billion people living in China and India are striving mightily right now to approach the materialistic lifestyle of the average North American.

So how can we find our way around the global calamity the human race seems to be hurtling towards?

“Humanity needs a fundamentally new approach to managing the assets upon which we all depend,” said Janet Ranganathan, director of the People and Ecosystems programme at the World Resources Institute, an environmental group based in Washington.

“We need new ways of making decisions at all levels that fully value ecosystems and the services they provide us,” she said.

END_OF_DOCUMENT_TOKEN_TO_BE_REPLACED

Knowledge does not often inspire action. Feelings like compassion and anger do. Good art generates passion.

Here’s a relevant excerpt from an article written by an artist in recent issue of SEED magazine:

The point is that the artists’ view is invaluable precisely because they are not experts and do not have the authority granted by science. They are only as persuasive as their images. As nonexperts—though interested and knowledgeable—they stand in for the view of the everyman. This reflects the nature of urban and natural systems. They transcend boundaries; they transcend borders, disciplines, issues, and expertise. With art, the viewer knows that she has a license to interpret, to critically evaluate the work, that her opinion matters. 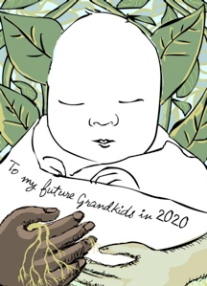 Toronto artist Franke James exemplifies this in a series of beautiful and powerful visual essays on environmental topics on her website. Franke has a very personal and thoughtful take which brings home some of the dry and terrible facts of climate change. Highly recommended.

Also be sure to check out Franke’s timely visual essay that has been featured in newspapers and likely to become a classic:

My SUV and Me Say Goodbye

May 30 (IPS) – The vast majority of North Americans now declare that they want action on climate change. But whether people are truly willing to embrace “carbon-neutral” lifestyles — including giving up their gas-guzzling sports utility vehicles — remains an open question, say experts.

This article is part two of a three-part series published by IPS on natural capital and how future global prosperity and equity can be achieved through the preservation of ecosystems. See Part One: Like Enron, Earth Inc. Sliding Into Bankruptcy and Part Three: How to Kick-Start the 21st Century Eco-Economy

Scientists have made a strong case that the only way to stave off the worst impacts of climate change — floods, storms, wildfires, disease epidemics and sundry other unpleasant events — is by slashing greenhouse gas emissions a whopping 80 percent from the 1990 baseline by 2050. European policy-makers are already putting plans in place to meet that target.
North Americans, whose region is by far the worst polluter, are beginning to talk about reductions, but few understand the sweeping breadth of the changes needed to reach the 80 percent target.

“The American public’s awareness about global warming is extremely high, but that doesn’t mean very much,” said Anthony Leiserowitz, director of Strategic Initiatives at Yale University’s School of Forestry and Environmental Studies