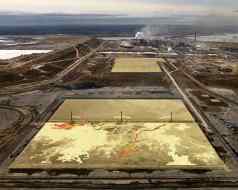 Could carbon capture and sequestration save the world?

Canadian taxpayers are putting $1.6 billion into the experiment

Like a reckless gambler, the federal government’s plan to deal with our emissions of climate-altering carbon dioxide is to put most of our money on an unproven, risky and expensive long shot called “carbon capture and sequestration,” CCS for short. In a pair of October announcements, the Alberta and federal governments committed $1.6 billion to use this untested technology to reduce carbon emissions from an Alberta coal plant and a Shell Oil tar sands upgrader. Billions more are promised.

Canada puts 600 million tonnes of carbon dioxide into the atmosphere every year. That has to stop. This generation, you and me, must determine what methods and technologies offer permanent CO2 reduction at the scale we need, and do so quickly, safely and at the lowest cost. And we must act on that knowledge as if the future of children’s lives depend it because we are shaping the world they will inherit.

We cannot rely on political and business leaders to make these decisions on their own, as will become evident.

What other ways could we reduce our CO2 emissions with $1.6 billion of public money – $200 per Canadian family of four?

Take time to be outside today.

Think about everything that nature provides – air, water, plants and animals that sustain us. Such gifts should not be taken lightly for they can vanish or be degraded. With our numbers and powerful technologies we are ‘the bull in nature’s china shop’.

We need to take great care and practice Climate-safe Living.

3 Rules to dial down the temperature on our global greenhouse:

Demand that business and government provide transport, activities and products that use minimize fossil fuel use.

May you always cherish this Earth and share in her joys.

[I’m an independent journalist based in Canada who supports his family and the public interest writing articles about important environmental issues. This is now only possible with your support (see Collapse of Media). A small contribution ($5, $10, $20) is the ONLY way this can continue.  PayPal or Credit Card 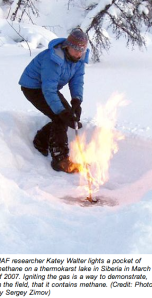 “The way we’re going right now, I’m not optimistic that we will avoid some kind of tipping point.”

The frozen cap trapping billions of tonnes of methane under the cold waters of the Arctic Ocean is leaking and venting the powerful greenhouse gas into the atmosphere, new research shows.

It is not known if this may be one of the first indicators of a feedback loop accelerating global warming.

Researchers estimate that eight million tonnes in annual methane emissions are being released from the shallow East Siberian Arctic Shelf, which is equivalent to all the methane released from the world’s oceans, covering 71 percent of the planet.

“That’s still very significant,” Natalia Shakhova, a researcher at the University of Alaska in Fairbanks, told IPS. “Before, it was assumed that this region had zero emissions.”

Methane concentrations measured over the oceans are currently about 0.6 to 0.7 parts per million (ppm), but they are now 1.85 in the Arctic Ocean generally, and between 2.6 and 8.2 ppm in the East Siberian Arctic Shelf, an area roughly two million square kilometres in size, said Shakhova.

Shakhova, and her University of Alaska colleague Igor Semiletov, led eight international expeditions to one of the world’s most remote and desolate regions and published their results in the Mar. 5 edition of the journal Science. END_OF_DOCUMENT_TOKEN_TO_BE_REPLACED

Returned from Panama a few days ago. I was offline for a week in a village in autonomus Kuna Yala territory on an island in the south Caribbean Ocean with no electricity, no roads, vehicles….just the sounds of the ocean and children playing. It was an amazing experience amongst unique group of Indigenous people still living by their traditional ways with a very strong emphasis on family, community and reciprocity.

Thanks to travel funding from an educational organization I was able to be at a unique workshop on the island where 18 indigenous people from around the world came to share their experiences in dealing with climate change. They are also documenting how their traditional knowledge is helping them adapt. What is often forgotten by those of us in the north is the lengthening of summer seasons, shortening winter, or changes in rainfall that are minor inconveniences for us often spell disaster for those who are subsistence farmers.

Special thanks to Ken of Ottawa, James from Toronto, Richard of Oshawa, Aidan who lives in Germany, Siri of London UK, Michael of Toronto, David of Salmon Arm and Catherine from Atikokan for your recent support. It is heartening to receive your encouragement and desire to help ensure I can continue to write and report on these important issues for everyone.

Thanks to these good folks the Community Supported Environmental Journalism Fund has now reached $1450.00, nearly 10 per cent of what’s needed for 2010.

There are some very important articles I’m hoping to write this year so help out if you can.

Contributions can be made via PayPal or Credit Card here:

(NOTE: For ocean lovers there is a major conference on Oceans this May –there are new prospects of international governance to hopefully end the ruthless rush to get the last fish. But will need $1000 to be able to get there)

New research from several international research groups now reveals that at least one metre sea level rise is virtually certain. Confirms other recent studies that found that IPCC predictions of less than a half a meter rise in sea levels is around 3 times too low. See the Niels Bohr Institute at the University of Copenhagen and the scientific journal, Geophysical Research Letters. 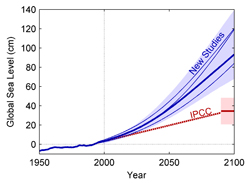 The mighty mountains of hazardous electronic waste are growing by about 40 million tonnes a year globally. In China, India and South Africa, those mountains are expected to grow 200 to 500 percent in the next decade, a new report warns.

And that’s just from domestic sales of TVs, computers and cell phones. The figure doesn’t include millions of tonnes of e-waste that is exported, mostly illegally, into these countries.

Sales of electronic consumer goods are skyrocketing in emerging economies, but that is not matched by capabilities to properly collect and recycle such products, which contain both toxic and valuable materials, says the United Nations report, “Recycling – from E-Waste to Resources“.

It was released in Bali, Indonesia Monday at a meeting of the Basel Convention on the Control of Transboundary Movements of Hazardous Wastes and Their Disposal.