We Can Live Without Oil

[Update: Why the BP spill cannot be cleaned up]

The policies and deals that contributed to the massive oil spill under way in the Gulf of Mexico are also jeopardising the Earth’s vital biological infrastructure, according to the Global Biodiversity Outlook 3, published Monday.

The British Petroleum oil spill of 5,000 barrels a day in the Gulf of Mexico, which began Apr. 20 when an explosion caused a rupture at the Deepwater Horizon oil rig, will have devastating consequences for marine life and coastal ecosystems for decades, experts say.

Similar business and policy decisions, multiplied thousands times over the last hundred years, have put the biological infrastructure that supports life in jeopardy, according to the Global Biodiversity Outlook 3 (GBO3) report, issued May 10 by the Convention on Biological Diversity.

The report is the most current assessment of the state of the planet’s biodiversity, the living organisms that provide us with health, wealth, food, fuel and other vital services.

In this study, “you can clearly see the outlines of what could be the sixth great extinction event of all life on Earth,” said Thomas Lovejoy, biodiversity chair at the Washington DC-based Heinz Centre for Science, Economics and the Environment, and chief biodiversity adviser to the president of the World Bank.

The biodiversity trends are almost all negative: the declines are exponential and potential tipping points loom, Lovejoy, a leading tropical biologist, told Tierramérica. He led the scientific review committee of the GBO3 and will publicly launch the report Monday at the opening of the Convention on Biological Diversity science meeting in Nairobi.

[Do you like this article? It is funded through contributions from readers. Please click here to learn more.]

One approaching tipping point is the irreversible collapse of Amazon rainforest, he said. A recent million-dollar study revealed that combination of three factors could trigger an unstoppable conversion of the world’s largest tropical forest into savannah grassland.

The continued trend of these factors would result in an enormous loss of species and huge volumes of climate-altering carbon emissions. The impacts on millions of local people “would be staggering,” Lovejoy said.

“Now’s the time to get serious… We have to take the GBO3 as a wake-up call,” he said.

This is the International Year of Biodiversity, but the alarm bells have rung loudly for years.

In 2002, 123 countries that are members of the Convention promised to take urgent action to reduce current rates of biodiversity loss. Eight years later, using data supplied by those countries, the GBO3 reveals that those promises have not been met.

Nearly a quarter of plant species are threatened with extinction, while corals and amphibians are in sharp decline, and the populations of all vertebrates have fallen by one-third in the past 30 years.

Asked recently why biodiversity was so important, why species extinction matters when we have all kinds of technology, Lovejoy responded by saying: “You can’t eat the Internet.” Nor can we breathe without plants that supply oxygen.

But we can live without oil. 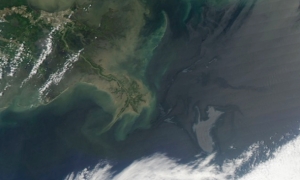 However, concern about impacts on ecosystems seems to be last on the list in the decisions on extracting oil, minerals and timber, said Kierán Suckling, director of the non-governmental Centre for Biological Diversity, based in the southwestern U.S. state of Arizona.

“If the ecologists who are consulted at the end are very aggressive, maybe they can scale down a project 5 percent,” Suckling said in a Tierramérica interview. “All the power resides with those are pushing for development.”

BP’s offshore oil production in the Gulf of Mexico was given exemptions from environmental reviews by the U.S. government, said Suckling. And there were no real plans for how to deal with a major spill.

Ecosystems have enormous value, but it is difficult to calculate in monetary terms, according to the expert. The Gulf is an important food resource, estimated at 2 billion dollars a year for the southern U.S. state of Louisiana alone.

But that doesn’t come close to the region’s real value. Suckling wondered: “How do you value the vast wetlands of the Gulf that have been there for hundreds of thousands of years?”

“For millions of years, sea turtles have laid their eggs on the sandy beaches in the Gulf of Mexico. Who are we to come along and in a few short decades drive them into extinction?” he said.

Biodiversity protection is a moral and ethical issue, according to Suckling. “Loss of biodiversity impoverishes us as human beings because we evolved to interact with all these other species.” 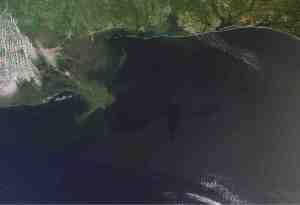 Meanwhile, Lovejoy believes that if ecosystems were assigned economic value, there would be “much more intelligent risk management.”

Instead of offshore drilling, society could decide to improve efficiency in fuel consumption. For example, if U.S. car and truck efficiency were improved to 42 miles per gallon, it would save millions of barrels of oil a year and save drivers billions of dollars in fuel costs, according to an analysis by the U.S. non-governmental Union of Concerned Scientists.

“We have to elevate the importance of biology on the human agenda,” said Lovejoy. The challenge is “how do we get to this point without being driven to it by huge disasters?”

“The biological infrastructure of the planet is in jeopardy and it is in our direct interest to do something about it,” he concluded.

First published as:  We Can Live Without Oil, But Not Without Flora and Fauna – IPS ipsnews.net.

2 thoughts on “Why the BP Oil Spill Really Happened”

Leave a Reply to Oily Politics of Influence: 3 of 4 oil and gas lobbyists used to work for US govt « Stephen Leahy, International Environmental Journalist Cancel reply