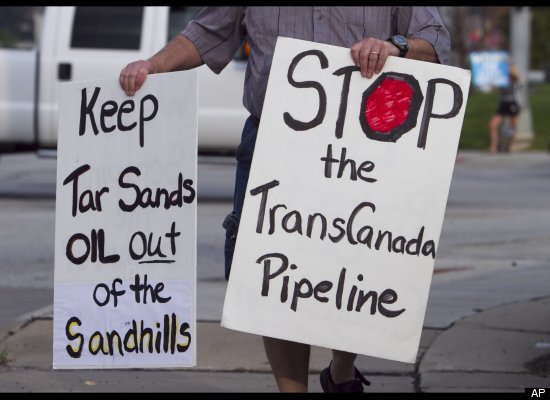 [This is a 2011 repost about Keystone XL and expansion of fossil fuel production while world’s nations are supposed to be reducing climate-wrecking emissions of carbon. — Stephen]

Canada and the United States are now the centre of Bizarro World. This is where leaders promise to reduce carbon emissions but ensure a new, supersized oil pipeline called Keystone XL is built, guaranteeing further expansion of the Alberta tar sands that produce the world’s most carbon-laden oil.

“It’s imperative that we move quickly to alternate forms of energy – and that we leave the tar sands in the ground,” the U.S.’s leading climate scientists urged President Barack Obama in an open letter Aug. 3.

“As scientists… we can say categorically that it’s [the Keystone XL pipeline] not only not in the national interest, it’s also not in the planet’s best interest.”

The letter was signed by 20 world-renowned scientists, including NASA’s James Hansen, Ken Caldeira of the Carnegie Institution, Ralph Keeling of the Scripps Institution of Oceanography, and George Woodwell, founder of the Woods Hole Research Center

The proposed seven-billion-dollar Keystone XL pipeline would carry 700,000 to 800,000 barrels of tarry, unrefined oil every day from the northern Alberta tar sands 2,400 kilometres south through the U.S. heartland to refineries in Oklahoma and Texas.

Embedded in all that bitumen – the tar sands form of crude oil – will be an estimated 150 million tonnes of carbon dioxide (CO2) emissions every year. That’s more CO2 than the annual emissions of 85 percent of the world’s countries. Oil-rich Norway emits a mere 50 million tonnes.

Meinshausen was not involved in the letter to Obama.

Emissions attributed to the project are “enormous” and officials must take into account how it will add to climate change, Meinshausen told IPS.

President Obama and Canada’s Prime Minister Stephen Harper say they are worried about climate change and have promised to make major CO2 reductions by 2020. Both countries are parties to the U.N. Framework Convention on Climate Change, whose membership unanimously swore to keep the rise in global temperatures to less than two degrees C to avoid dangerous levels of climate change.

Any hope of reaching that goal requires Canada, the U.S. and other industrialised nations to cut emissions 25 to 40 percent compared to their 1990 levels by 2020. And because CO2 lasts forever, the ultimate goal has to be net zero carbon emissions.

Both the U.S. and Canada have failed to cut their emissions, but at least U.S. emissions have stopped growing. It’s not well known, but Canada has become a compulsive overeater of carbon. Its emissions “weight” ballooned from 590 million tonnes in 1990 to 734 million tonnes in 2008, according to U.N. statistics.

In the early 1990s, Canada promised to lose weight and even signed the 1997 Kyoto Protocol swearing to the world community that it would be a fit and trim 550 million tonnes by 2010 or 2012 at the latest. Government estimates put Canada at substantial 710 million tonnes (Mt) in 2010, 28 percent above its target weight. That leaves the country in seventh place amongst the big boys, just behind Germany, a country with more than twice the population.

In Copenhagen at the end of 2009, Harper himself promised other global leaders that Canada would do better and trim down to 607 Mt by 2020. However, an official government report called “Canada’s Emissions Trends” quietly released last month projects a continuing carbon binge, piling on the weight to a whopping 775 to 850 Mt by 2020. Most of that extra carbon lard is from the tar sands. 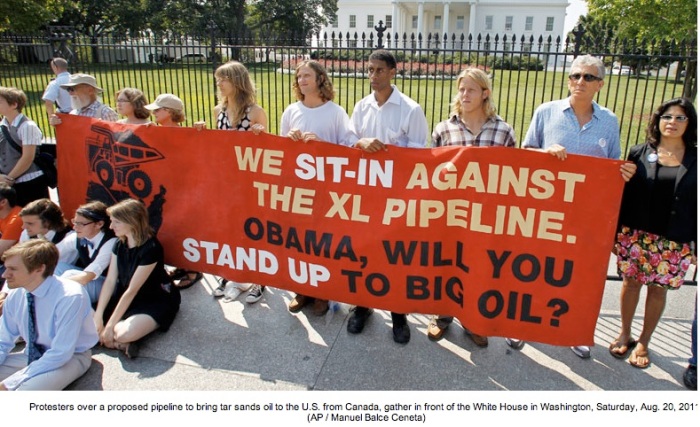 In Bizarro World, everything is the opposite of what it should be: lose weight by eating more, avoid dangerous climate change by guaranteeing it. And so enormous sums of money, including incentives and subsidies from both governments, are being spent to put ever more tar sands’ CO2 into the atmosphere.

In fact, an incredible 2.077 trillion dollars is expected to be invested expanding and maintaining the tar sands over the next 25 years, according to the Canadian Energy Research Institute.

The tar sands are the world’s second largest deposit of oil, albeit in the form of tar, with an estimated 300 billion barrels of recoverable oil. There is so much carbon in the tar sands that if much of it is burned, there is no chance of stabilising the climate, according to Hansen and other climate experts.

That means dangerous climate change where billions suffer the effects of an ever-hotter world, with mega-droughts, mega-flooding, and mega- storms. It bears repeating that the undisputed cause of this will be the atmosphere’s thick blanket of CO2 from the tar sands and other sources of fossil fuel that trap much more of the sun’s energy – effectively forever.

That is the nightmarish future Hansen and thousands of other scientists have been warning governments about for over 20 years.

For some, the climate nightmare has already begun. The U.S. experienced the most extreme weather in its history this past July, including an unprecedented area of exceptional drought, according to the National Climatic Data Center.

It had already been a record breaking year for weather disasters, totaling 32 billion dollars in economic losses – five times the yearly average – and that’s only the damages up to June. It doesn’t include anything from the hurricane season that’s just getting started.

In Bizarro World, the right response is to jack up the odds of having trillion-dollar weather disasters and more extreme weather by building a pipeline that will dump another 150 Mt of CO2 annually into atmosphere starting in 2015.

That’s why the Harper government, at the apparent behest of tar sand oil companies Shell, Valero, ConocoPhillips, Canadian Natural Resources Limited and Cenovus Energy, has lobbied the Obama administration to approve the pipeline “tout suite” as the Canadians say. 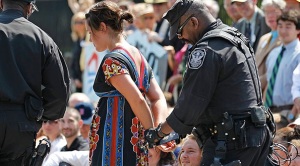 Secretary of State Hillary Clinton has promised to wrap up a review of the Keystone XL project before the end of the year. The State Department promised to issue the final environmental impact statement this month, and hold a second round of public hearings along the six- state route in September.

Industry insiders say this is all pro forma and that the Obama administration will not listen to its own climate experts and will approve Keystone XL, justifying it as “enhancing America’s energy security”.

For clear-headed citizens who find themselves in Bizarro World, there is little choice but protest and civil disobedience to force their governments to protect the future interests of today’s children. Starting Aug. 20, thousands of people will descend on the White House in Washington DC as part of a two-week long sit in. They hope to pressure the Obama administration to deny the “presidential permit” necessary for construction on the pipeline.

“We hope those so inclined will join protests scheduled for August and described at tarsandsaction.org,” concludes the letter from the U.S.’s foremost scientists – fully aware their expert advice will most likely be ignored in Bizarro World.