The Middle East is home to 70% of the world’s desalination plants, but the more water they process, the less economically viable they become

By Stephen Leahy and Katherine Purvis (First published in the Guardian)

Gulf states are among the most water-scarce in the world. With few freshwater resources and low rainfall, many countries have turned to desalination (where salt is removed from seawater) for their clean water needs. 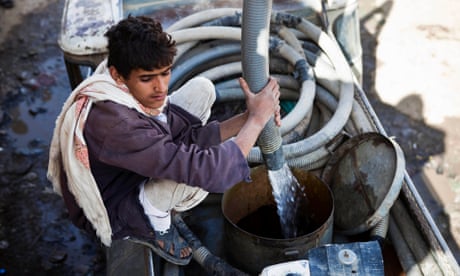 But Gulf states are heading for “peak salt”: the more they desalinate, the more concentrated wastewater, brine, is pumped back into the sea; and as the Gulf becomes saltier, desalination becomes more expensive.

“In time, it’s going to become impossible to use desalination in a way that makes economic sense,” says Gökçe Günel, an anthropologist at the University of Arizona. “The water will become so saline that it will be too expensive to desalinate.”

The Middle East is home to 70% of the world’s desalination plants – mostly in Saudi Arabia, the United Arab Emirates, Kuwait, and Bahrain. Tens of billions of dollars, $24.3bn (£18.8bn) in Saudi Arabia alone, are being invested over the next few years to expand desalination capacity.

The process is cost and energy intensive; it pumps seawater through special filters or boils it to remove the salts. The resulting brine can be nearly twice as salty as normal Gulf waters, according to John Burt, a biologist at New York University Abu Dhabi.

But the 250,000 sq km Gulf is more like a salt-water lake than a sea. It’s shallow, just 35 metres deep on average, and is almost entirely enclosed. The few rivers that feed the Gulf have been dammed or diverted and the region’s hot and dry climate results in high rates of evaporation. Add in a daily dose of around 70m cubic metres of super-salty wastewater from dozens of desalination plants, and it’s not surprising that the water in the Gulf is 25% saltier than normal seawater, says Burt, or that parts are becoming too salty to use.

Peak salt, says Günel, mirrors the concept of peak oil, a popular concept in the 1970s used to describe the point in time when the maximum rate of oil extraction had been reached. “Peak salt describes the point at which desalination becomes unfeasible,” she says.

And studies have shown that the Gulf will only get saltier in the future. Raed Bashitialshaaer, a water resources engineer at Sweden’s Lund University, says that the growth of desalination plants in the region is happening far faster than his own 2011 study estimated.

With groundwater sources either exhausted or non-existent and climate change bringing higher temperatures and less rainfall, Gulf states plan to nearly double the amount of desalination by 2030 (doc). This is bad news for marine life and for the cost of producing drinking water – unless something can be done about the brine.

Farid Benyahia, a chemical engineer at Qatar University, believes he has a solution. He recently patented a process that could eliminate the need for brine disposal by nearly 100%. The process uses pure carbon dioxide (emitted during the desalination process by burning fossil fuels for power) and ammonia to turn brine into baking soda and calcium chloride. Whether the process is cost-effective remains to be seen but Benyahia believes it could be, especially if markets are found for large volumes of the end products.

Other efforts are also under way to reduce desalination’s country-sized carbon footprint which globally accounts for 76m tonnes of carbon dioxide per year – nearly equivalent to Romania’s emissions in 2014.

“Climate change policymakers in the region are pushing for water pricing and awareness campaigns around consumption to explain to governments and citizens that they can’t continue to use water in the same way.”