“The first law of humanity is not to kill your children.”

Scientists in Germany say they have found how greenhouse gases from burning fossil fuels are helping to trap the jet stream, resulting in extraordinary weather such as the 2010 Pakistan flood and the 2011 heat wave in the United States. 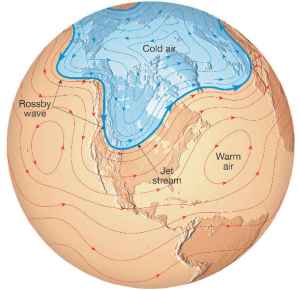 Giant atmospheric waves called Rossby waves are meanders in the strong, high-altitude winds known as jet streams and have a major influence on weather. These wave movements are caused by the difference in temperatures between the cold air from the Arctic and hot air from the tropics.

When the waves shift north, they suck warm air from the tropics to Europe, Russia, or the U.S., and when they swing down, they do the same thing with cold air from the Arctic, said Petoukhov.

“During several recent extreme weather events, these planetary waves almost freeze in their tracks for weeks,” he said. “So instead of bringing in cool air after having brought warm air in before, the heat just stays.”

This unnatural pattern is due to human heating of the climate through emissions of greenhouse gases that result from burning fossil fuels, according to the study published this week in Proceedings of the National Academy of Sciences.

However, this heating of the atmosphere is wildly uneven. The Arctic is warming two to three times faster than the global temperature rise of 0.8C and that affects the Rossby waves and is slowing the jet stream.

“(Our research) complements previous research that already linked such phenomena to climate change,” said Hans Joachim Schellnhuber, a co-author of the study. END_OF_DOCUMENT_TOKEN_TO_BE_REPLACED

The region has been prone to bad winters after summers with very low sea ice, such as 2011 and 2007, Francis said. END_OF_DOCUMENT_TOKEN_TO_BE_REPLACED