Barely 24 hours after it signed a new global climate change agreement in Durban, South Africa, Canada became on Monday the first country to formally withdraw from the Kyoto Protocol, the only legally binding treaty to reduce emissions causing climate change.

The 17th Conference of the Parties (COP17) concluded last Sunday with an agreement called the Durban Platform, which includes a consensus agreement for a second commitment period of the Kyoto Protocol after the first expires at the end of 2012. 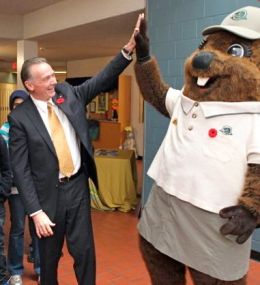 Canada’s government under Stephen Harper essentially agreed to a continuation of Kyoto only to announce formal withdrawal after Canadian Environment Minister Peter Kent arrived back safely in Canada on Monday.

“Kyoto, for Canada, is in the past,” Kent said in Durban on Dec. 7. Still, he insisted in a statement on Monday, “Canada went to Durban in a spirit of good will.”

Despite the so-called good will, Canada is well known as a pariah on climate and environmental issues, having being judged as the most uncooperative country for the last five climate treaty COPs.

Kent brought a “reckless arrogance with him to Durban, where he’s maintained a hard line… and fought hard to put polluters before people”, according to Climate Action Network, an international coalition of environmental non-governmental organisations (NGOs) attending COP17.

Canada’s withdrawal comes as no surprise. Mirroring the views of the fossil fuel industry, the Harper government has expressed disdain for the Kyoto Protocol. In a fundraising letter prior to coming to power in 2006, Harper called it a “socialist scheme to suck money out of wealth-producing nations”.

Under the Kyoto Protocol, Canada agreed to reduce its carbon emissions by six percent by 2012 in comparison to its 1990 emissions.

While Canadians individually cut emissions at the urging of previous governments, the enormous expansion of emission-laden tar sands operations inflated Canada’s emissions by 24 percent above 1990 emissions.

On Monday, Kent said that for Canada to meet emissions targets would entail taking every vehicle off the road and cutting the heat in every building in the country. He did not mention reducing emissions from the tar sands.

“I regret that Canada has announced it will withdraw and am surprised over its timing,” said Christiana Figueres, executive secretary of the U.N. Framework Convention on Climate Change (UNFCCC), under which climate negotiations like COP17 are held. END_OF_DOCUMENT_TOKEN_TO_BE_REPLACED

Canada was roundly criticised by other nations at a major U.N. climate meeting last week after being caught underreporting carbon emissions from its tar sands oil production facilities, one of the countrys biggest and fastest growing sources of global warming gases.

But even the “full emissions” data that Canada finally released represents only about half of the actual emissions, according to a new report.

Canada likes to claim the city-sized tar sands project in the western province of Alberta represents only five percent of the country’s entire emissions, but the real number is closer to 10 percent, Mech told IPS.

Getting oil out of the tar sands requires extraordinary efforts, including enormous amounts of energy, and has been labeled ‘dirty oil’ as a result.

“Average emissions for oil sands production and upgrading (well-to- pump) are estimated to be 3.2 to 4.5 times as carbon intensive as conventional crude produced in North America,” concluded Mech’s report, “A Comprehensive Guide to the Alberta Oil Sands”.

“The tar sands are huge in terms of their impact on the environment but also on Canadian democracy. Oil is starting to run the country now,” she said.

END_OF_DOCUMENT_TOKEN_TO_BE_REPLACED

Dec 10 (IPS) – The family has just finished up an expensive seven-course restaurant meal, and the late-arriving cousins can only snack on bread sticks. When the bill arrives, the truculent, rich uncles — Canada, Japan and the United States — insist that the cousins, although poor and still very hungry, ought to pay a full share.

And then Uncle Canada suggests that he pay less because he has a big appetite and can’t help himself.

With the fate of the planet in the balance, many critics say that is the current state of the negotiations ongoing in Bali at the international climate change talks. And that is despite an urgent appeal by more than 200 of the world’s leading climate scientists late last week.

“Drastic reductions are needed…we have no time to lose,” said Richard Somerville of the Scripps Institution of Oceanography at University of California at a press conference in Nusa Dua, on the island of Bali. Political leaders from virtually every nation will finalise the next steps to a new climate change treaty under the United Nations Framework Convention on Climate Change (UNFCCC) at the end of this week. END_OF_DOCUMENT_TOKEN_TO_BE_REPLACED