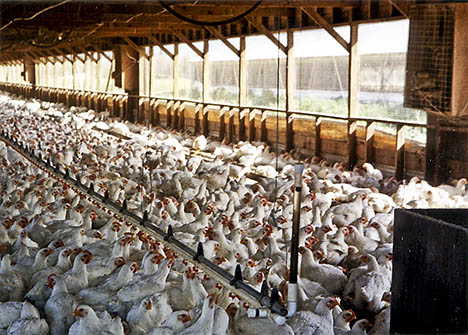 [This is a re-post from 2007. Meat production in factory farms are major animal health and welfare issues, they also produce more emissions than cars and trucks. Not to mention creating perfect conditions for diseases like bird flu and swine flu and who knows what else. — Stephen]

Cramming 100,000 chickens into a single facility to produce low-cost meat also creates the perfect atmosphere for the spread of disease

Factory farms are responsible for both the bird flu and emissions of greenhouse gases top those of cars and sport utility vehicles (SUVs), according to a report released Monday.

Although there is no definitive scientific proof, those farms are very likely where avian or bird flu started and will continue to be responsible for new outbreaks, said the author of the report, Danielle Nierenberg, a Worldwatch research associate. END_OF_DOCUMENT_TOKEN_TO_BE_REPLACED 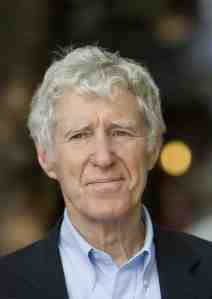 The founder and president of the Washington-based Earth Policy Institute, he is also considered by many to be one of the world’s most influential thinkers.

“It looks like I’m a radical because the mainstream media aren’t reflecting the reality of our situation,” Brown says.

A farmer from the eastern U.S. state of New Jersey, Brown entered the U.S. Civil Service in the 1960s, becoming an expert on foreign agricultural policy before leaving to found the Worldwatch Institute in 1974.

The winner of many awards and honourary degrees, Brown is the author of 50 books. In 2001, he founded the Earth Policy Institute to provide a roadmap for achieving an environmentally sustainable economy.

His most recent book is “Plan B 4.0: Mobilizing to Save Civilization”, the fourth and perhaps most urgent version of the Plan B series, available for download at the institutes’s website. In Plan 4.0, Brown calls for carbon emissions cuts of 80 percent by 2020.

“We cannot afford to let the planet get much hotter,” he explains simply. END_OF_DOCUMENT_TOKEN_TO_BE_REPLACED