Skip to content
HomeOUR Roof is on Fire: Dangerous Climate Change is Here 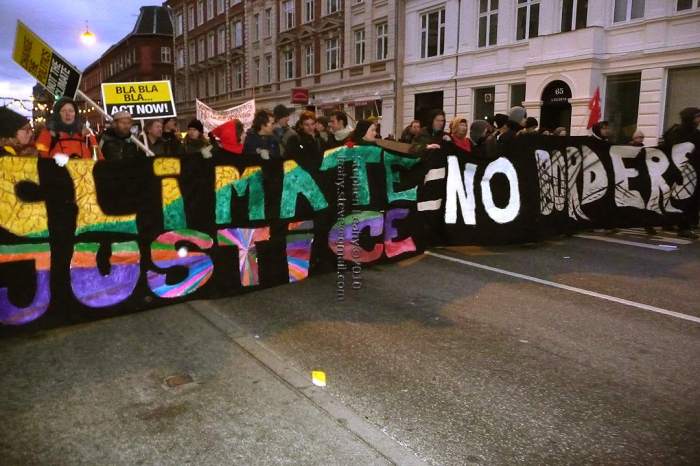 It will take lot of us – probably in the streets” to make politicians face the truth, says climate scientist James Hansen.

[Dangerous climate change is already upon us say some of the best scientists we have. But political leaders — and most of the public — don’t get it. This is an attempt to close the chasm between climate reality and climate denial fantasy. I wrote this at the end of the Copenhagen Climate meetings last December thanks in part to financial contributions from readers that allowed me to do the research and interviews. — Stephen]

“Our leaders do not get the scale of the problem or the rapidity of the changes.”            — Andrew Weaver, climatologist at Canada’s University of British Columbia

The roof of our house is on fire but our leaders, our economic system and we ourselves are ignoring the alarms and continuing to add more fuel. There are no exit doors in our house; there is nowhere else to go.

The two-week climate summit in Copenhagen came to an end with disappointing results and details that are still vague.

A ”Copenhagen Accord” was agreed by the US, China, South Africa and India by Friday night. It w 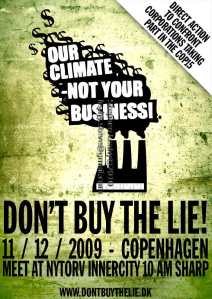 as unclear which other countries were willing to support it.

But coral reefs are dying, the Arctic is melting and rising sea levels threaten the homes of millions. And we’re on our way to a planet-transforming four-degree C rise in global average temperatures in as soon as 50 years.

Future generations could face an utterly transformed planet, where large areas will be seven to 14 degrees C warmer, making them uninhabitable. In this world-on-fire, the one to two metre sea level rise by 2100 will leave hundreds of millions homeless, according to the latest science presented at the “4 Degrees and Beyond, International Climate Science Conference” at the University of Oxford in September.

“Our leaders do not get the scale of the problem or the rapidity of the changes. They don’t get that it must be dealt with now,” said Andrew Weaver, a climatologist at Canada’s University of British Columbia and lead author of the Intergovernmental Panel on Climate Change (IPCC) reports.

“Now” means that global carbon emissions peak in five years and begin to decline shortly thereafter to near zero by 2050, according to a report summarising the very latest science by the world’s top climate scientists, including Weaver. Called “The Copenhagen Diagnosis, 2009: Updating the World on the Latest Climate Science”, it was released a week before the talks began here Dec. 7.

“More modest, achievable targets in the short term will get the planet on the right track,” Canada’s Prime Minister Stephen Harper has been often quoted as saying. Harper’s “modest” target for Canada amounts to a three-percent reduction from 1990 levels by 2020. The U.S. target

Based on the scientific evidence, the world’s best and brightest climate scientists conclude that Canada and other industrialised nations must reduce emissions 25 to 40 percent by 2020 compared to 1990 to have any hope of keeping the warming at two degrees C. 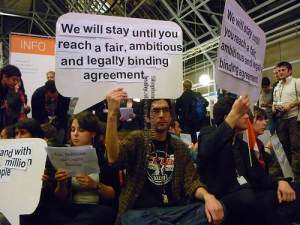 “Two degrees C will be a very difficult for modern society to cope with,” said Pål Prestrud, an Arctic researcher and director of Center for International Climate and Environmental Research in Oslo, Norway.

Even if all emissions were cut off today, global temperatures would decline very slowly – over a period of a thousand years. “If we wait too long, it will be too late to do anything,” Presetrud warned TerraViva here.

No scientist considers stabilising the climate at two degrees warmer to be getting the planet on the right track. The Arctic is already melting at the present 0.8 C of warming. There may be no sea ice in the summer in just 5 to 10 years.

What happens when the cold top of the world that drives the global weather system warms up? Temperature and precipitation patterns in Europe and North America will change, affecting agriculture, forestry and water supplies, the “Arctic Climate Feedbacks: Global Implications” report warned in September.

Worse still, a warmer Arctic will emit large volumes of carbon and methane, which are currently stored in the frozen soils called permafrost. Once that process gets underway, runaway global heating may be unstoppable.

At two degrees warmer, the majority of corals will die due to a combination of warmer temperatures and ocean acidification. Coral reefs are the nurseries for much of the fish in the oceans and hundreds of millions of

people are dependent on them. Sea level rise will displace many millions more.

Finally, two degrees C of warming is only the global average. What it really means is that temperatures will range from one to four or five degrees hotter depending on the region. It also means at least one metre of sea level rise by 2100. Countries in Africa, small islands states and the least developed countries are calling for a 1.5 C target here.

Humans have enjoyed 10,000 years of climate stability, in which the global average temperature varied less than one degree C – even during the Little Ice Age and Middle Warming Period, says Robert Corell, director of the Global Change Programme at the H. John Heinz III Center for Science, Economics, and the Environment in Washington, DC.

Global emissions over the past five years have been above the worst case scenarios of the IPCC, and on a path for a five- to six-degree C rise in temperatures by 2100, Corell told TerraViva.

He also warned that Earth’s natural absorbers of carbon, the oceans and forests, are taking up less carbon every year, meaning concentrations of heat-trapping carbon will increase faster than expected.

All the commitments for reductions made in Copenhagen up to date translate into a 3.8-degree C rise in global temperatures, he said in an interview.

“Canada’s federal government doesn’t have a freakin’ clue what two degrees means,” said Canada’s Weaver with vehemence. Vested corporate interests from one sector are blocking the transformation to a low carbon economy, he said: “Big oil is running things.”

“I am sorry to say,” writes James Hansen, “that most of what politicians are doing on the climate front is greenwashing – their proposals sound good, but they are deceiving you and themselves at the same time.”

One of the most respected climate experts, Hansen is director of NASA’s Goddard Institute for Space Studies.

“Governments are stating emission goals that they know are lies,” Hansen wrote in the Observer newspaper Nov. 29.

“Are we going to stand up and give global politicians a hard slap in the face, to make them face the truth?” he asked. “It will take lot of us – probably in the streets. Or are we going to let them continue to kid themselves and us, and cheat our children and grandchildren?”

One thought on “OUR Roof is on Fire: Dangerous Climate Change is Here”