The newly operational MTSAT-2 images from February 2nd are particularly striking. The images, showing the coldest clouds as white, reveal the extent of swirling white cloud and the deep eye of the storm which is clearly visible just off the coast of Northern Australia. — University of Leicester

My full posting of Yasi including graphs and pixs Will Super Cyclone Yasi be Australia’s Katrina? 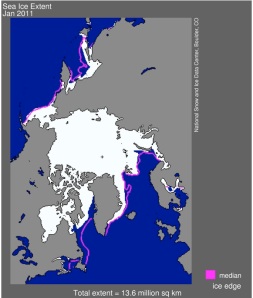 No surprise given the absurdly warm Arctic temperatures of +21C above normal in Dec/Jan.

I’ve written about why this is happening and the consequences several times in recent weeks:

The Arctic summer’s sea ice melt will likely be another record low pushing the world to an ice-free Arctic one summer in the new future. FYI weather-related records will continue to fall faster than dominos without drastic cuts to our fossil fuel emissions. And frankly I’m tired of writing about it. — Stephen 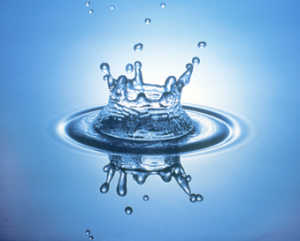 For more visit Inside the Bottle – has great video: “The Story of Bottled Water” – Stephen

My previous post explains why getting rid of plastic water bottles are important for our health and environment (and water tastes much better in steel or glass).

Parts of Arctic +21C above normal in January

The world’s northern freezer is on rapid defrost as large volumes of warm water are pouring into the Arctic Ocean, speeding the melt of sea ice, according to a new study.

Surface temperatures in parts of the Arctic have been 21 degrees C above normal for more than a month in recent weeks.

“Boats were still in the water during the first week of January,” said David Phillips, a senior climatologist with Environment Canada, referring to southern Baffin Island, some 2,000 km north of Montreal. This is a region that receives just four or five hours of weak sunlight during the long winter. Temperatures normally range from -25 to -35 degrees C but were above zero on some days in January.

“It’s impossible for many people in parts of the eastern Arctic to safely get on the ice to hunt much-needed food for their families – for the second winter in a row,” Phillips said in a report.

The warming and melting of the Arctic is happening much faster than expected and new data reveals that huge volumes of warmer water from the North Atlantic are now flowing into and warming up the Arctic Ocean, researchers reported Friday in the journal Science.

“In the past hundred years the waters in the Fram Strait have warmed about two degrees C,” says co-author Thomas Marchitto, of Colorado University’s Institute of Arctic and Alpine Research.