Cars are parked 22 hours a day on average

The costs of car ownership and travel are far higher than anyone realizes: a 100 km total trip costs between 65 and 80 dollars when parking, fuel, wear and tear, insurance, depreciation, repairs are included. A car is usually parked and unused 22 hours a day but still incurs costs. Why not let someone use the car when you’re not and make some money at the same time Robin Chase told me in this 2011 article. She launched Buzzcar in France as part of a strategy for reducing CO2 emissions and congestion in cities.  UPDATE (Feb 2015) Chase’s concept has come to North America – RelayRides is one such peer-to-peer car sharing service you can now try.  — Stephen

The world’s more than 850 million cars and small trucks are parked 20 to 22 hours a day. Why not use these vehicles more efficiently by letting other people drive them when the owners aren’t, asks Robin Chase, CEO of Buzzcar, a car- sharing network to be launched shortly in France.

“Sharing vehicles is much more efficient and represents a huge opportunity,” Chase told some 800 attendees from more than 50 countries at the OECD’s annual International Transport Forum (ITF) in Leipzig last week. The Forum is an intergovernmental organisation for the transport sector involving 52 different nations.

The ITF projects there will be three times as many cars – an eye-popping 2.5 billion – by 2050 according to its Transport Outlook 2011 report released at the meeting. Adding that many more vehicles in a sustainable way is an “extraordinary challenge”, said Jack Short, Secretary General of the ITF.

The vast majority of this growth will come from the developing countries since travel by passenger vehicle in a number of high-income countries has not increased, and even declined in some countries. Short acknowledged making such projections is risky because many factors such as lower economic growth, congestion in cities or new technologies will have an impact on levels of car ownership in future.

And the Transport Outlook report did not factor in the potential for car-sharing to offer personal mobility without car ownership. 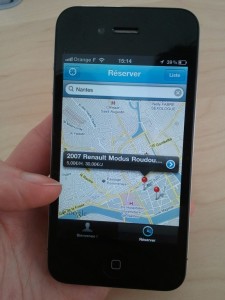 Buzzcar is a car sharing service where car-owners in a city or town allow their idle cars to be used by other local citizens in exchange for getting about 70-75 per cent of the rental fee, Chase told IPS in an interview. Even when a car is parked it costs their owners money, she says. The average cost of owning and operating car is 8,000 to 12,000 dollars a year even if it sits parked 22 hours a day. (update: more like $9,000 to 14,000 according to auto clubs)

Buzzcar is an opportunity for car owners to get better value out of their vehicles and to help with ever- rising costs of car ownership. More importantly car sharing reduces the need for car ownership overall, she says.

Chase was a co-founder of Zipcar, a U.S.-based car-rental network with more than a half million members where people rent cars by the hour from easy-to-access neighbourhood lots or stations. Zipcar owns some 8,000 rental cars. She then went on to start GoLoco, a ride sharing company in which people pay to ride along with others in the network, and the drivers take a cut of the fees. END_OF_DOCUMENT_TOKEN_TO_BE_REPLACED