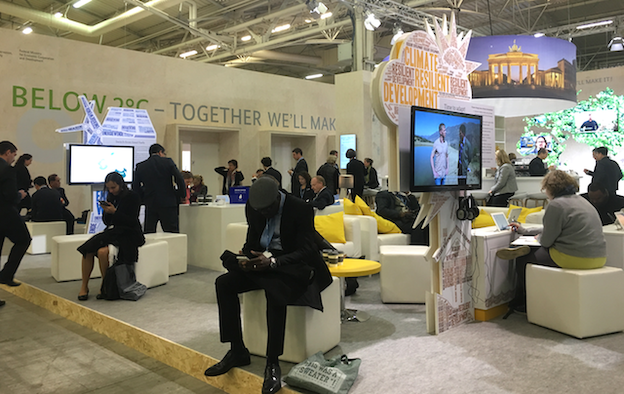 Leaders of 30 nations began the Paris climate negotiations with a call to cut CO2 emissions dramatically to keep the global average temperature rise below 1.5C. These countries are part of Climate Vulnerable Forum (CVF) — countries highly vulnerable to impacts of climate change.

The call for a global target of 1.5C is supported by 106 of the 195 countries in Paris this week. They also call for 100 percent renewable energy and a full decarbonization of the global economy by 2050.

Important to note that 2.0C is a political target not a scientific one. Moreover climate science does support 1.5C as a safer level of climatic change than 2.0. Currently global warming is 1.0C.

Leaders Inspired Speeches but BAU for Negotiators
Monday saw 150 leaders making speeches about the need for urgent action. However in the negotiating rooms today it was business as usual crawling along at a snail’s pace with negotiators apparently oblivious to their leaders impassioned speeches and pleas for urgent action said Saleemul Huq is the Director of the International Centre for Climate Change & Development (ICCCAD) in Bangladesh.

Deforestation accounts for at least 12 percent of CO2 emissions and among developing countries it’s often the largest source of emissions. Today the Lima-Paris Action Agenda “Forest Focus” launched a number of forest protection initiatives including a commitment Germany, Norway and the United Kingdom, to provide $5 billion from 2015 to 2020, if forest countries demonstrate measured, reported and verified emission reductions.