MONTREAL, Sep 23’07 (IPS) – More than 190 nations agreed this week to combat global warming and accelerate the healing of the ozone layer, although critics say more could have been accomplished.

The sun shone bright and warm here on Friday, the final day of the 19th Meeting of the Parties to the Montreal Protocol to protect the ozone layer. Outside, caravans of pre-school children in strollers or holding hands as they walked sported hats and long-sleeved shirts to protect their delicate skin.

It can be easy to forget that the sun was not always so dangerous, and that modern society is responsible for putting chemicals into the atmosphere that continue to destroy the ozone layer that protects all life from harmful levels of solar ultraviolet radiation.

And we forget that things could have been far worse without international action in the form of the Montreal Protocol, which opened for signature 20 years ago this week.

Sadly, that action came late and was not vigorous enough for millions of people who have or will get skin cancer. END_OF_DOCUMENT_TOKEN_TO_BE_REPLACED 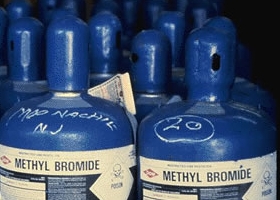 The Chemical That Must Not Be Named
By Stephen Leahy

MONTREAL, Canada, Sep 20 (IPS) – Delegates from 191 nations are on the verge of an agreement under the Montreal Protocol for faster elimination of ozone-depleting chemicals, but the United States insists it must continue to use the banned pesticide methyl bromide.

Even as another enormous ozone hole forms over the Antarctic this week, the rest of the world appears to be giving in to U.S. demands despite the fact that the use of methyl bromide in developed countries was supposed to have been completely phased out by Jan. 1, 2005 under the Montreal Protocol on Substances that Deplete the Ozone Layer.

“It’s a black mark on this meeting. It is the chemical that must not be named,” said David Doniger, climate policy director at the Natural Resources Defence Council, a U.S. environmental group.

“There is a powerful lobby group of strawberry and vegetable growers in Washington,” Doniger told IPS.

Methyl bromide is a highly toxic fumigant pesticide which is injected into soil to sterilise it before planting crops. It is also used as a post-harvest decontaminant of products and storage areas. Although it is highly effective in eradicating pests such as nematodes, weeds, insects and rodents, it depletes the ozone layer and poses a danger to human health.

While alternatives exist for more than 93 percent of the applications of methyl bromide, some countries such as the U.S., Japan and Israel claimed that because of regulatory restrictions, availability, cost and local conditions, they had little choice but to continue its use as a pest control. And so despite the ban, the Montreal Protocol allows “critical use exemptions” for countries to continue to use banned substances for a short period of time until they can find a substitute.

In 2006, the United States received an exemption to use 8,000 tonnes of methyl bromide, compared to 5,000 tonnes for the rest of the developed world combined. END_OF_DOCUMENT_TOKEN_TO_BE_REPLACED

The World Meteorological Organization is reporting this week that the hole is back and bigger than ever. And it could grow larger in as spring returns to the region. In the past two years ozone holes larger than Europe have opened over the Antarctic and Southern Ocean.

The hole and the entire ozone layer and life on Earth would be in far worse shape if not for the The Montreal Protocol.

See also my stories on ozone and Montreal Protocol: