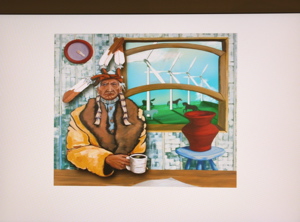 Green energy is the only way to bring billions of people out of energy poverty and prevent a climate disaster, a new study reveals.

Conservative institutions like the World Bank, the International Energy Agency and accounting giant Price Waterhouse Coopers (PwC) all warn humanity is on a path to climate catastrophe unless fossil fuel energy is replaced by green energy.

The U.N.’s Sustainable Energy for All initiative intends to bring universal access to modern energy, doubling the share of renewable energy globally, and doubling the rate of improvement in energy efficiency by 2030.

If those targets are met and similar efforts undertaken to reduce deforestation, then climate disaster can be avoided, said Joeri Rogelj of the Institute for Atmospheric and Climate Science in Zurich  who headed the analysis published Sunday in the journal Nature Climate Change.

Weird is the only way to describe January temperatures whipsawing between record warm and arctic cold over a span of a few days. Experts say that is what climate change looks like: weird, record-shattering weather.

Here’s a fact that goes beyond weird to astonishing. Anyone who is 27 years old or younger has never lived through a month that was colder than the global 20th century average. In other words, we’ve had 334 consecutive months with above average temperatures, according to the U.S. National Oceanic and Atmospheric Administration.

Last summer, the Arctic sea ice shrunk to half of what it used to be during summers only three decades ago. Our planet’s weather is driven largely by the two cold polar regions and the warm tropics. With the Arctic defrosting, it should be no surprise our weather is getting weird. And that it’s not going to get better.

Our planet is heating up because we each year put thousands of millions of tonnes of carbon dioxide (CO2) into the atmosphere by burning coal, oil, and natural gas. CO2 acts as heating blanket keeping the planet warm by trapping some of the sun’s heat.

The amount of extra heat-energy being trapped is like exploding 400,000 Hiroshima atomic bombs per day 365 days per year, calculates James Hansen, a climate scientist who heads the NASA Goddard Institute for Space Studies.

Cautious scientists like Hansen are terrified of what’s coming. Conservative institutions like the World Bank and accounting giant Price Waterhouse Coopers (PwC) have warned we’re on a path to heating the entire surface of the planet by an average of four or five degrees C before 2100. That translates into eight to 12 degrees C hotter in places like Canada.