“We were surprised the evidence from the past 30 years was so clear,” Mora told IPS.

“Ongoing biodiversity loss and its consequences for humanity’s welfare are of great concern and have prompted strong calls for expanding the use of protected areas as a remedy,” said co-author Peter Sale, a marine biologist and assistant director of the United Nations University’s Institute for Water, Environment and Health.

“Protected areas are a false hope in terms of preventing the loss of biodiversity,” Sale told IPS.
The authors based their study on existing literature and global data on human threats and biodiversity loss.

When asked about the 2010 global biodiversity protection agreement in Nagoya, Japan to put 17 percent of land and 10 percent of oceans on the planet under protection by 2020, Sale said it was “very unlikely those targets will be reached” due to conflicts between growing needs for food and other resources.

“Even if those targets were achieved, it is not going to stop the decline in biodiversity,” he said.

One reason for this is “leakage”. Fence off one forest and the logging pressure increases in another. Make one coral reef off limits to fishing and the fishing boats go the next reef.

Another reason protected areas aren’t the answer is that fences or patrol boats can’t keep out the impacts of pollution or climate change.

Finally, the pressures on the planet’s resources are escalating so quickly that “the problem is running away from the solution”, he said. 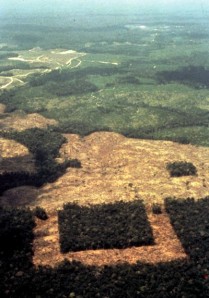 “That’s putting all our eggs in one basket,” he said. “A major shift is needed to deal with the roots of the problem.”

The ever-expanding footprint of humanity is the primary cause of global biodiversity loss. When the world’s population was five billion people in 1985, the amount of nature’s resources being used or impacted became more than the planet could sustain indefinitely according to many estimates, said Mora.

The world population, currently at seven billion, is well beyond Earth’s ability to sustain. By 2050, with a projected population of 10 billion people and without a change in consumption patterns, the cumulative use of natural resources will amount to the productivity of up to 27 planet Earths, the study found.

Sustaining the current seven billion people on the planet requires a major shift in resource use. At present, the average U.S. citizen’s ecological footprint is about 10 hectares, while a Haitian’s is less than one. The planet could sustain us if everyone’s footprint averaged two ha, Mora said.

If there are more people, then there are simply fewer resources available for everyone, so population control will be needed along the lines of “one child per woman”, he said.

“I’m from Colombia, it blows my mind that some governments in the developing world pay women to have more children,” he added.

Hardly anyone is focused on the pressing need for a major shift, said Sale.

“The awareness of the public about this is shockingly low,” he noted. What is needed is for humanity as a mass to change direction, he said.

“But can we find the hook, the lever that’s needed to make that happen?” Sale asked.