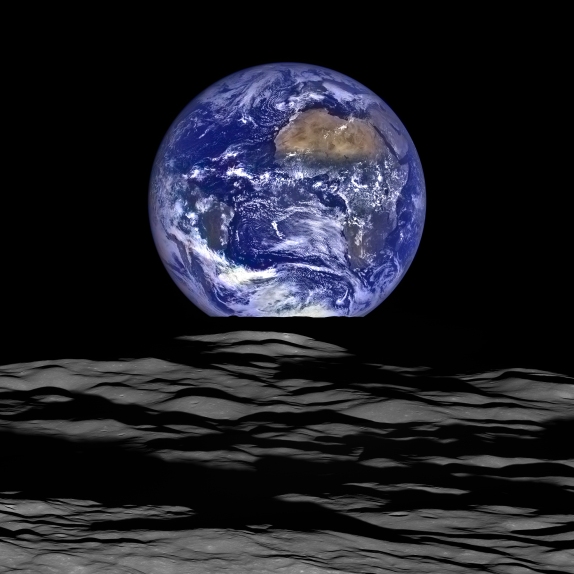 The moon has no atmosphere so it is scorching hot (+100C) during the day and bitterly cold (-150C) at night. The Earth has an atmosphere made up of oxygen, nitrogen, carbon dioxide (CO2) and other gases. Over 150 years ago scientists proved that CO2 traps heat from the sun. We also know without any doubt that burning fossil fuels like oil, gas and coal emits CO2.

Measurements, not computer models or theories, measurements show that there is now 46% more CO2 in the atmosphere than 150 years ago before massive use of fossil fuels. That extra CO2 is like putting another blanket on at night even though you are already nice and warm.

The Earth is now 1.0 C hotter on average according to the latest measurements. Heat is a form of energy and with so much more energy in our atmosphere our weather system is becoming supercharged resulting in stronger storms, worse heat waves, major changes in when and where rain falls and more.

[See also Why the Paris Agreement is Historic in 60 Words]

Experts on the health of our planet are terrified of the future. They can clearly see the coming collapse of global civilisation from an array of interconnected environmental problems.

“We’re all scared,” said Paul Ehrlich, president of the Center for Conservation Biology at Stanford University.

“But we must tell the truth about what’s happening and challenge people to do something to prevent it,” Ehrlich told IPS.

This collapse will take the form of a “…gradual breakdown because famines, epidemics and resource shortages cause a disintegration of central control within nations, in concert with disruptions of trade and conflicts over increasingly scarce necessities”, they write.

Already two billion people are hungry today. Food production is humanity’s biggest industry and is already being affected by climate and other environmental problems. “No civilisation can avoid collapse if it fails to feed its population,” the authors say.

Escalating climate disruption, ocean acidification, oceanic dead zones, depletion of groundwater and extinctions of plants and animals are the main drivers of the coming collapse, they write in their peer-reviewed article “Can a collapse of global civilisation be avoided?” published this week.

Dozens of earth systems experts were consulted in writing the 10-page paper that contains over 160 references.

“We talked to many of the world’s leading experts to reflect what is really happening,” said Ehrlich, who is an eminent biologist and winner of many scientific awards.

Our reality is that current overconsumption of natural resources and the resulting damage to life-sustaining services nature provides means we need another half of a planet to keeping going. And that’s if all seven billion remain at their current living standards, the Ehrlichs write.

If everyone lived like a U.S. citizen, another four or five planets would be needed.

Global population is projected to increase by 2.5 billion by 2050. It doesn’t take an expert to conclude that collapse of civilisation will be unavoidable without major changes.

We’re facing a future where billions will likely die, and yet little is being done to avoid certain disaster, he said.

“Policy makers and the public aren’t terrified about this because they don’t have the information or the knowledge about how our planet functions,” he said. END_OF_DOCUMENT_TOKEN_TO_BE_REPLACED 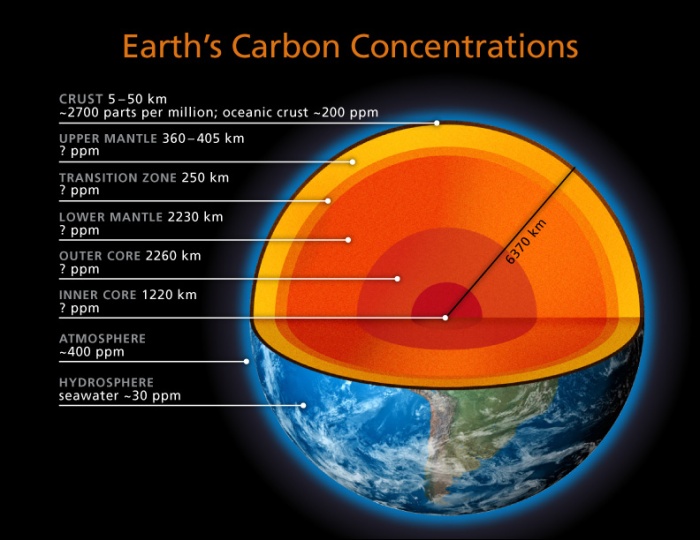 Every living thing from bacteria to President Barack Obama is made of carbon from exploding stars.

Billions of years ago, motes of carbon and other stardust formed the Earth. Carbon is the basis of all life but most vanished deep inside the planet, researchers now believe. And surprisingly, life thrives inside the rocky layers kilometres below our feet.

“Microbes survive by eating rock at those depths,” said Robert Hazen, executive director of the , a decade-long, global collaboration investigating the inner workings of the planet.

“Life is very different under those tremendous pressures and temperatures,” Hazen told IPS.

The variety of bacterial life at extreme high-pressure depths worldwide constitutes a subterranean “Galapagos”, he said. There may be as much as half of all life in the ground deep below us, according to one estimate, although Hazen thinks that might be too high.

“Drill a hole one or two kilometres deep just about anywhere and you will find a sparse but hardy microbial community,” said Isabelle Daniel of l’Université Claude Bernard in Lyon, France.

“These deep microbes, which live in the tiniest cracks and fissures in rocks, survive on the chemical energy of minerals,” said Daniel, who is one hundreds of scientists involved in the Deep Carbon Observatory (DCO).

DNA analysis reveals a diversity of microorganisms, mainly single-celled. However, deep below the ocean floor live fungi-like organisms with complex cell structures. Researchers estimate that these are extraordinarily long-living organisms, conceivably living for millions of years.

“There are also a huge numbers of viruses, their DNA carefully inserted into living cells,” said Hazen.

END_OF_DOCUMENT_TOKEN_TO_BE_REPLACED

“We were surprised the evidence from the past 30 years was so clear,” Mora told IPS. END_OF_DOCUMENT_TOKEN_TO_BE_REPLACED

[Based on my article Climate Summit: A Moment That Must Be Seized ]

Governments, the media and the public aren’t paying attention to the “planetary emergency” unfolding around them. The situation is like firefighters yelling “fire” in crowded room and still no listens.

“The situation is absolutely desperate and yet there’s nothing on the front pages or on the agenda of world leaders,” said Pat Mooney, executive director of the ETC Group, an international environmental organisation based in Ottawa.

“The lack of attention is a tragedy,” said Mooney, who has 40 years experience in international environment and development issues.

Humanity is failing in its stewardship of the planet. An incredible 85 percent of the world’s oceans are in trouble, said Susan Lieberman, director of international policy at the Pew Environment Group, a U.S. organisation.

“Planetary emergency” is how many in the world’s scientific community describe “the mess we are in“. They will detail their comprehensive state of the planet assessment at the “Planet Under Pressure” conference in London Mar. 26-29.

That assessment will summarise the overwhelming evidence that “the continued functioning of the Earth system as we know it is at risk,” conference organisers previously told IPS.

Climate change, which is overheating the planet and making the oceans more acidic, is just one of the major challenges. Another is the ongoing decline of biodiversity, where so many plants and animals are going extinct that the Earth’s living systems on which humanity depends are unraveling.

Fresh water is another “planetary boundary” humanity is pushing up against. Water use has increased six-fold in the past century and in many places the quality of water resources has been degraded. Other challenges include increasing poverty, food and energy security, and the current financial and economic instability.

A first and essential step in a green transition is for nations to commit to phasing out harmful and unsustainable subsidies for fossil fuels, fisheries and industrial agriculture.

According to Mooney, some countries and large corporations see the green economy in terms of a post-petroleum future where resources and energy for industrial production comes from biomass and other living things. Most of those “living resources” are in the global South and local people rightly fear a massive land grab, he said.

Foreign investors have already gained access to more than 35 million hectares in Africa, Asia and South America for food and biofuel production according to GRAIN, a small NGO working with small farmers and farming communities.

We all have responsibility to ensure our stuff if properly disposed of.

Mountains of hazardous waste grow by about 40 million tons every year. This waste, mostly from Europe and North America, is burned in developing countries like Ghana in a hazardous effort to recover valuable metals.

A children’s school in Accra, Ghana’s capital, was recently found to be contaminated by lead, cadmium and other health-threatening pollutants at levels over 50 times higher than risk-free levels. The school is located directly beside an informal electronic waste salvage site.

“Those wastes are poisoning our children,” Sampson told IPS from Accra.

Ghana does not regulate the importation and management of electronic waste, or e-waste. The government hopes to have rules in place next year, he…

The average U.S. citizen uses an astonishing 22,000 times their weight in minerals, metals and fuels in their lifetime

No national park, delicate ecosystem or community is off limits in the voracious hunt for valuable metals, minerals and fossil fuels, said the Gaia Foundation’s report, “Opening Pandora’s Box”. The intensity of the hunt and exploitation is building to a fever pitch despite the fact the Earth is already overheated and humanity is using more than can be sustained, the 56-page report warns.

“We’re calling for a global moratorium on new, large-scale mining, extraction and prospecting,” said Teresa Anderson of The Gaia Foundation, an international NGO headquartered in London, UK that works with local communities.

mining and oil and gas projects. One in four iconic natural areas in Africa is negatively affected, the report notes.

“No matter where you live, land acquisitions for mining, oil or gas are coming,” Anderson told IPS following the report’s launch in London.

The easy-to-get resources are gone. Now the extractive industries, funded by pension funds and commodities speculators, are using new technologies like fracking for natural gas to get at previously unprofitable resources. END_OF_DOCUMENT_TOKEN_TO_BE_REPLACED 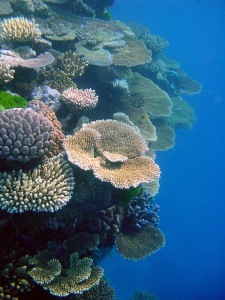 Take time to be outside today and think about everything that nature provides:  air, water, plants and animals that sustain us. Such gifts should not be taken lightly because with our numbers and powerful technologies we are ‘the bull in nature’s china shop’.

We need to take great care and practice Climate-safe Living.

Demand that business and government provide transport, activities and products that use minimize fossil fuel use.

May you always cherish this Earth and share in her joys.