Repost from 2011: More and more science reveals the not surprising connection between a warming planet and extreme weather. Won’t stop unless emissions of fossil fuels stop — Stephen

(Bonus: How we can kick the fossil fuel addiction)

Two new studies document significant impacts with just a fraction of the heating yet to come from the burning of fossil fuels. Fortunately, another new report shows the world can end its addiction to climate-wrecking fossil-fuel energy by 2050.

Extreme precipitation and flooding over the entire northern hemisphere increased by seven percent between 1951 and 1999 as a result of anthropogenic global warming. That represents a “substantial change”, Zwiers told IPS, and more than twice the increase projected by climate modeling.

Zwiers and Xuebin Zhang of Environment Canada used observations from over 6,000 weather stations to measure the impact of climate warming on the intensity of extreme precipitation for the first time. The study was published Wednesday in the journal Nature.

This suggests that the Earth’s climatic system may be more sensitive to small temperature increases than previously believed.

END_OF_DOCUMENT_TOKEN_TO_BE_REPLACED

Extreme weather is fast becoming the new normal. Canada and much of the United States experienced summer temperatures during winter this year, confirming the findings of a new report on extreme weather.

For two weeks this March most of North America baked under extraordinarily warm temperatures that melted all the snow and ice and broke 150-year-old temperature records by large margins.

A new report from the Intergovernmental Panel on Climate Change (IPCC), released Mar. 28, provides solid evidence that record-breaking weather events are increasing in number and becoming more extreme. And if current rates of greenhouse gas emissions are maintained, these events will reach dangerous new levels over the coming century.

Since 1950 there have been many more heat waves and record warm temperatures than in previous decades.

This will only increase in future decades, as will heavier rainfall events in tropical regions and the high latitudes, according to the Special Report on Managing the Risks of Extreme Events and Disasters to Advance Climate Change Adaptation (SREX).

The hottest day that occurs once in 20 years is likely to become a one-in-two year event by the end of the century, except in the high latitudes of the Northern hemisphere, where it is likely to happen once every five years.

END_OF_DOCUMENT_TOKEN_TO_BE_REPLACED 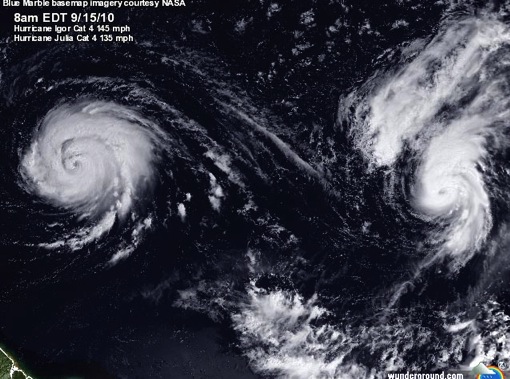 Record warm Atlantic sea surface temperatures have spawned three simultaneous hurricanes this Thurs and Friday: Hurricanes Igor, Julia, and Karl. Although this is not the first time other records continue to fall according to weather expert Jeff Master. Julia was the strongest hurricane on record so far east, Karl was the strongest hurricane so far south in the Gulf of Mexico, and Earl was the 4th strongest Atlantic hurricane so far north.

Master said Friday: “we are now ahead of the pace of the terrible hurricane seasons of 2004 and 2005 for number of major hurricanes so early in the year”.

Four major storms pounded Haiti in August and September, leaving nearly 1,000 dead and a million people homeless. International relief efforts are keeping people alive and sheltered, but the already degraded landscape has been badly battered, washing away crops, soil and the few remaining trees in many areas.

“I’m not sure if things could get worse here. Haiti must be the most desperate environmental crisis on the planet,” Joel Boutroue, resident humanitarian coordinator and head of the United Nations Development Programme (UNDP) in Port-au-Prince, told Tierramérica.

Boutroue was referring to the future of the poorest country in the Americas, where U.N. peace-keepers have been stationed since 2004. But he added that “the international response to the disaster is quite good.”

While pockets of severe malnutrition still exist, there is access to clean water and only about 3,000 families were without shelter as of the end of October, he said.

However, it is not possible to feed an entire country of 9.5 million people with international aid for long. Haiti cannot feed itself, and even growing 50 percent of its own food is years away, Boutroue fears. END_OF_DOCUMENT_TOKEN_TO_BE_REPLACED

This is a sampling of the little known information about hurricanes from respected scientists collected in the modestly titled “Steve’s Hurricane Handbook 2007 – Lessons Learned 2004-2006? “ (1.2 mb pdf). It’s a compendium of the most interesting quotes and facts about hurricanes from hurricane experts since 2004. END_OF_DOCUMENT_TOKEN_TO_BE_REPLACED